VARANASI: With three days left for the big battle in Varanasi, workers and senior leaders of BJP, Congress and AAP are swarming into the ancient Hindu holy city to give a push to the prospects of their candidates in the prestigious election which is being watched with keen interest in India and outside.The seat has gained significance as Bharatiya Janata Party’s prime ministerial candidate Narendra Modi is pitched against Aap Aadmi Party leader Arvind Kejriwal and Congress nominee Ajai Rai for 12 May election. 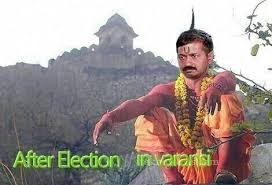 Samajwadi Party candidate Kailash Chaurasia and Bahujan Samaj Party candidate Vijay Prakash Jaiswal are among those who have made the contest keener. Modi’s close aide Amit Shah has been in the city for a while preparing ground for the party’s electoral push. A special war room has been created for planning and strategising the campaign.
For Modi, it is not only victory that is critical but also its margin. Party leader Arun Jaitley Thursday led the protests against the Election Commission, which denied Modi permission to hold a rally in the city for security reasons. The party also said the permission for some other events had come “late.”Party souces said that campaign will pick up further in the next two days. “Party president Rajnath Singh will be holding public meetings tomorrow (9 May),” a BJP leader told reporter.  ”More leaders will be coming, but the programmes are still to be finalised,” he said.
Campaigning in Varanasi will end 10 May. BJP workers from several parts of the country are in Varanasi to lend a helping hand to the campaign. The Congress campaign is expected to get fillip with Rahul Gandhi’s proposed road show in the city May 10.The Congress has also sent some of its big guns to the city including union ministers Ghulam Nabi Azad, Anand Sharma, Jairam Ramesh, Salman Khurshid and K. Rahman Khan. Congress leaders from Uttar Pradesh including Pramod Tiwari are also helping the party’s poll effort.
Kejriwal has been extensively campaigning in Varanasi for over 20 days, addressing corner meetings and reaching out to people. Party leaders Yogendra Yadav, Somnath Bharti, Manish Sisodia, Rakhi Birla, Anand Kumar, Sanjay Singh are among those contributing to the poll effort.The party is laying thrust on “door to door campaign.” Party leaders are also addressing people associated with a trade to seek their support.