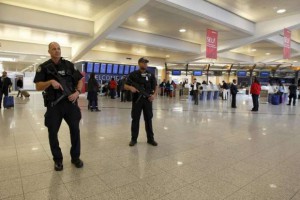 WASHINGTON: French jets struck Islamic State targets in Iraq, taking off from the Charles de Gaulle aircraft carrier for the first time. The military said on Twitter yesterday that two targets had been destroyed, without elaborating.
French President Francois Hollande also said last week France would step up its attacks against IS targets in Iraq and Syria. He has also called for a grand coalition, including the United States and Russia, to eradicate the IS.
Meanwhile, United States has issued a global travel alert for its citizens in response to increased terrorist threats. The State Department said that current information suggested the Islamic State group, al-Qaeda, Boko Haram and others continued to plan terrorist attacks in multiple regions.
The alert, it said, will remain in place until 24th February 2016. France, Russia, Mali and several other countries have seen deadly attacks in the past month.