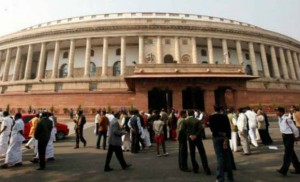 NEW DELHI: Pandemonium prevailed in Parliament as the main opposition party Congress continued to disrupt proceedings over the Srinagar NIT crisis and the Uttarakhand issue in both Houses on Tuesday.
Key legislation such as the Goods and Services Tax (GST) bill await clearance from the lawmakers in the Upper House, where Congress-led Opposition has a majority.The Communist Party of India (CPI) earlier this morning gave a motion of suspension seeking suspension of Zero Hour to discuss the Jawaharlal Nehru University (JNU) issue in the Rajya Sabha.
The Bharatiya Janata Party also issued a three-line whip to all its MPs in Rajya Sabha and Lok Sabha, asking them to be present in the Parliament till Friday.The Congress Party, on the other hand, raised the Uttarakhand issue in the Rajya Sabha once again following which the House was adjourned till 12.
Meanwhile, the Congress vice president Rahul Gandhi also met with some students of the NIT Srinagar and assured them that the party will raise their concerns over campus safety with the government.
“Met students and parents from National Institute of Technology (NIT), Srinagar who expressed concern over the safety and security of students on (the) campus. I assured them that the Congress would raise their concerns and put pressure on the government to resolve the matter,” Rahul tweeted after the meeting.
On Monday, around 20 Congress Members of Parliament, including Leader of Opposition in Lok Sabha Mallikarjun Kharge and senior leader K.C. Venugopal, observed a sit-in protest near the well of the Lower House as the Uttarakhand issue dominated proceedings.
The leaders also raised slogans denouncing the NDA government over their actions in the hill state. Slogans such as ‘Manmani nahi chalegi’ and ‘Loktantra ki Hatya’ could be heard from the group of MPs sitting on the floor.