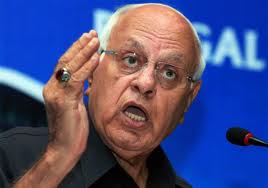 “Price rise was one of the biggest issues and that is what hit the Delhi government. Sheila Dixit lost because of that. It was not her fault, but how we at the centre couldn’t control the price rise. We are responsible for that defeat.”“We should have fought corruption hard… (but) we failed,” he said.On recent incidents of violence in Kashmir, Abdullah said: “There are people who try to create trouble so that people don’t vote but that doesn’t stop the process. I don’t think it will affect (the election).”
Hitting out at the Peoples Democratic Party (PDP), he said: “Mufti (PDP patron Mufti Mohammad Sayeed) and his people have got our leaders in south of Kashmir killed.”
On the inability of the National Conference-led state government headed by his son Omar Abdullah to stop the hanging of parliament attack convict Afzal Guru, Farooq Abdullah said: “What should I have done? There was a Supreme Court order. Why didn’t Mufti join the mercy petition and go to the Supreme Court…?”“Neither me nor (Ghulam Nabi) Azad were informed till he (Guru) was hanged. We protested against it in the cabinet meeting.”
On Omar Abdullah’s acceptance that there was a “Modi effect” in the Lok Sabha polls, Farooq Abdullah said: “There is no Modi wave in Kashmir.” ”What happened in Jammu is a different matter. As far as the rest of the country is concerned, I don’t know.”
“Modi has gone on to the bandwagon of Hinduism. I don’t know what the people of India want to do, whether they want Hinduism or they want a secular India,” he said.