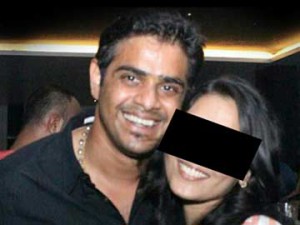 BANGALORE: Union Railway Minister Sadananda Gowda’s son Karthik has been accused of rape and cheating by an actress who claims to be his wife. The woman filed an FIR or police complaint hours after Karthik got engaged on Wednesday in Bangalore in Congress-ruled Karnataka.

The woman named Maithreya, while speaking to the media said that she met Karthik while her family was looking for a groom and on 05 June 2014 they both tied the knot.

Maithreya further claimed that they both knew each other since 8 May 2014 and became very good friends, following which Karthik married her.

The startling claims has shook the Gowda family as it came on a day when Karthik got engaged to another woman at a ceremony at Kushalnagar in Kodagu District on Wednesday. Meanwhile, the Railway Minister expressed shock over the woman’s claims and suspected a conspiracy and attempt to blackmail. Karthik has also rejected the woman’s claim.Sadananda Gowda told reporters He suspected “a big conspiracy” adding, “I feel hurt. My life is an open book. I will not lie or cheat public…I am shocked…This kind of blackmail.”
“I will speak to my son…I have to think if a girl has to blackmail…If Sadananda Gowda becomes a scapegoat…”, he said.Reacting to the woman’s claims, Karthik said, “There is nothing like that…My father is a respectable man…Why should I spoil it.”
“She has filed a complaint in RT Nagar police station against Karthik Gowda, Sadananda Gowda’s son, for allegedly raping and cheating her,” said the city’s Police Commissioner MN Reddi. Rejecting the woman’s claims, the union minister today said, “Take action against my son if he has done anything wrong.
I would say the allegations against him as false. He is my son, but if the allegations are true then action can be taken.” His son Karthik also denied the allegations, saying, “My father is a respectable man. Why should I spoil it?” As some in the BJP alleged a political conspiracy, State Chief Minister Siddaramaiah said, “I cannot comment, won’t comment. Law will take its own course.”

The woman has, in interviews to local television channels, claimed she met Karthik through a common friend. “How can he (Karthik) get engaged to another girl when he is already married to me?” she said.