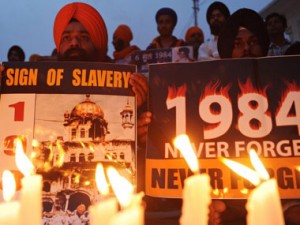 NEW DELHI : The United Nations Human Rights Council (UNHRC) has accepted a report on the 1984 “Operation Bluestar”, a code name given by the Indian Army for a security operation to flush out militants from the Golden Temple complex in Amritsar. The report was tabled during the 26th session of the UNHRC on “Interactive Dialogue On International Solidarity”.
The report was submitted  by United States-based human rights NGOs “International Educational Development” (IED) and “Association of Humanitarian Lawyers” (AHL), and the “Sikhs for Justice” (SFJ) rights group.
The UNHRC session was attended by representatives of 52 member countries, including India, United States, European Union, Australia, Israel, Japan, Germany, Switzerland, Iran and China. Several international human rights NGOs were also invited to address the Council members.
While giving details to ANI, Gurpatwant Singh Pannu of the SFJ said his organisation was of the view that basic humanitarian law provisions for the protection of civilians, cultural objects and places of worship were violated inter alia under Article 3 Common to the Geneva Conventions of 1949 and Protocols Additional I and II to the Geneva Conventions.
The NGO stated, “In our view, this attack also constituted an act of aggression according to the General Assembly Resolution 3314 (XXIX) of 14 December 1974 due to the status of the state of Punjab under the terms of the right to self-determination.”

Addressing the UNHRC during its 26th Session, Jatinder Singh Grewal, Director International Policy, SFJ, stated that member states are under an affirmative duty to support “peoples” right to self determination under UN Charter and Covenants. “We consider the Sikh claim to self- determination in the Punjab especially strong and that the international community should support the claim,” Grewal added.