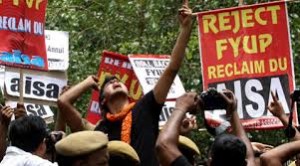 NEW DELHI: The University Grants Commission issued a fresh letter to Delhi University on Wednesday asking it to comply by tomorrow morning with the directive to roll back four-year undergraduate programme.
Meanwhile, even as the stand-off between the UGC and DU continued, 57 of 64 colleges to the university may have agreed to the UGC order to end the controversial four-year undergraduate programme but they can shift to the earlier format only after the varsity amends rules in this regard.
We are waiting for the university to take a decision on whether it wants to go back to the old three-year structure or compress the FYUP into a three-year format. We are waiting for an amendment to the university’s ordinance and only then we can go ahead with the admissions,” said S K Garg, president of DU’s Principals’ Association.
Asked whether the colleges have gone ahead and agreed to UGC’s directive even though there has been no decision taken by DU’s higher officials, he said, “The colleges received a letter from the Registrar informing them about the UGC orders and we inferred that the university was willing to change back to three-year format.”
Ever since UGC directed DU to roll back FYUP and conduct admission for three-year programme, there has been uncertainty over the admission process that involves the fate of over 2.7 lakh students clamouring for 54,000 seats in 64 colleges.
UGC yesterday said 57 of the 64 DU colleges, including prestigious ones, have said they are complying with its directive to start admissions for the three-year programme.A day before, principals of all colleges affiliated to DU had decided to defer th

liated to DU had decided to defer th