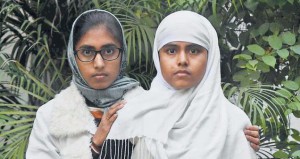 NEW DELHI : For the past four years, Gauhar Jahan Begum, a student of Lady Hardinge Medical College here has not stopped reliving those 60 minutes that changed her life.
It was a cold November night and everyone in the Ansari household in Bihar’s Madhubani district had retired to bed except Gauhar who was preparing for her class XII board exams. “I was always fond of studying and was up till 1.30 am. Sometime after 2 a.m. I heard a noise…” she says almost in a whisper.
The “noise” was the sound of gunshots piercing the stillness of the night.
Sixty minutes later, Gauhar’s father Safi Kullah Ansari and two brothers were found dead. “Our house is surrounded by open fields; they came with guns and knives and finished everything,” Gauhar’s voice trails off.
Apart from her mother and elder sister Mehar Jahan, her other two brothers — one of whom was spending the night at the family’s other house and another who was in Kuwait — also survived.
The attack was carried out by their neighbours, who were unhappy about the Ansari family acquiring a plot of land. “They kept harassing us. Finally, the Panchayat intervened and an official was sent to measure the land. After we demarcated our land, they told my father that on Eid, there would not be sacrificing of goats but a human sacrifice,” recalls Gauhar.
On November 14, 2010, two days before Eid al-Adah, the attackers carried out their threat.More tragedy followed two months after the midnight murders. The third brother who was diagnosed with clinical depression after the attack died in a road accident.
“I was in the middle of taking my Board exams. I don’t know how I sat through them,” says Gauhar. She scored 64 per cent in her XII exams and a year later sat for her pre-medical tests. She cleared the entrance to Lady Hardinge in her third attempt and was ranked 194th.
This was also a bone of contention between the families. The dispute over land apart, the neighbours appeared to have been angry that the girls were able to go to school.
“They kept asking our father to marry us off; when he bought us cycles to go to school, they would tease us and call us ‘boys.’ But my father, who was a teacher and himself cycled 120 km every day to reach school, would encourage us to study,” she says.
While Gauhar is now in medical school, Meher Jahan is studying to be an engineer.“My father would address me as Dr. Gauhar while I was still in high school. I had to do this for him,” she says.
But her struggle is far from over. The family has no money to pay for the education of both sisters. Mehar tried juggling her studies with a job but couldn’t cope with the stress.
Help from MP
Janata Dal (United) MP Ali Anwar has been helping the girls; he has also approached NGOs for help to fund their education. But both sisters are more worried about the safety of their mother and only surviving brother.
“There is no police protection for them. We were all witness to the murders and are under constant threat. While we worry about how to pay for our education, it is the safety of our brother and his family that keeps us awake at night. Can someone help us get police protection for him? He is all that we have,” the sisters plead.