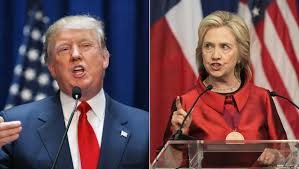 WASHINGTON: In the United States, Donald Trump has won Presidential primaries in all five states, while Hillary Clinton emerged victorious in four out of five.
Trump called himself the Republican presumptive nominee after victories in Connecticut, Delaware, Maryland, Pennsylvania and Rhode Island. The results bring him closer to the number of delegates he needs before the party’s national convention in July.

For the Democrats, Clinton was denied a clean sweep by Bernie Sanders. The Vermont senator won in Rhode Island and vowed to fight to the end of the primaries process.

Hillary Clinton is 90 per cent of the way to the number needed to claim her own nomination. Speaking at Philadelphia Convention Center after securing the four other states, Clinton said her campaign was setting bold, progressive goals to improve lives in the US.