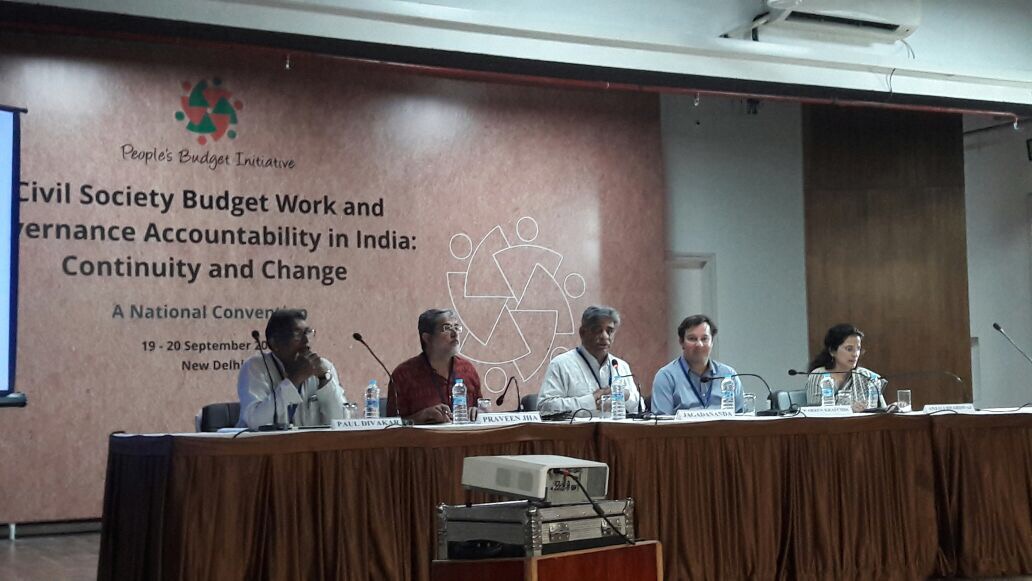 NEW DELHI : At a time when transparency in all Government sphere becomes a socio-political agenda and responsibility for Government sadly it’s an unfinished agenda in Indian budgets. Yet it is also a time when transparency and accountability in governance are gaining increasing significance as tools to fill in the gaps of democratic deficiencies.
A robust network of civil society and budget experts convened in Delhi a debate to discuss the issues of non-transparent governance. The issue was discussed in the Capital.  The participants under People’s Budget Initiative (PBI)’s national convention took part.

The membership included a diverse organisations working across different sectors in the country.The participants during the national convention agreed on pressing issues deserving a closer scrutiny and a greater public debate.The two day workshop Civil Society Budget Work and Governance Accountability in India: Continuity and Change’ aimed to coordinate inputs of all those gathered at the meeting for improved budget and governance accountability.
Noted activist Anjali Bhardwaj and the newly appointed Co-convener of PBI said that civil society should step up its initiative, responsibility to monitor and use whatever accountability and transparency tools are available. We as citizens need to ensure proper implementation of Clause 4 of the RTI Act which is about proactive disclosure of information in the public domain, and is the least implemented section of the law even after 12 years of the legislation. There is an equally strong need for a grievance reddresal law, referred as RTI 2 by some, so that the supervisory structures in the system can be held accountable,’’ she said.
The Bill introduced in 2011 and widely debated for bringing in time-bound grievance redressal needs to be passed by the Parliament,’’ she emphasized, adding, a host of other accountability legislations exist, but they need to be implemented. Most importantly, she emphasized that accountability of private sector is also becoming important issue now.
With a focus on e-governance, it was needed that information around people’s concerns and issues should be available in forms accessible to them. Warren Krafchik who heads International Budget Partnership said that budgets are a powerful way to link citizens with democracy and governance, and governments could engage citizens in these processes to open budgets. Southern countries have emerged as leaders in budget transparency norms shifting the global discourse on budget work.

Transparent data sharing is often conflated and confused with the idea of open government, participants emphasised. There are success stories on how growing citizens’ involvement increases allocations, equity in budget and effective spending of public money.  The head of Centre for Budget and Governance Accountability (CBGA) and Co convener of PBI Subrata Das also pointed out that the budget transparency still “remained an unfinished agenda.’’

Budget transparency at the grassroots level which provides locally relevant budget data about facility level services in a format that is easy to understand, and in a timely manner is yet to become a reality, Das pointed out. This kind of information will only help people connect with budget issues, the participants arrived at a consensus during the convention.