LUCKNOW: An image of BJP president Rajnath Singh wearing a traditional topi while offering prayers at a dargah in Lucknow has stirred a political debate a day after a top Shia cleric of Lucknow compared him to former Prime Minister Atal Bihari Vajpayee.The picture was reportedly taken at Baba Mir Kasim’s shrine in the beginning of this month, after the BJP chief filed his nomination papers. His aides say there is no political significance in the gesture; he was only honouring the custom of a shrine with which he has had a 15-year-long association. 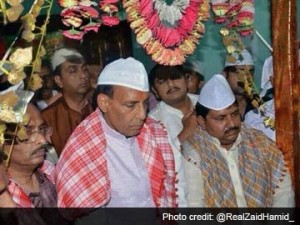 But juxtaposed with the headline grabbing meeting between Rajnath Singh and Lucknow’s top Muslim clerics, the picture could start a fresh debate within the BJP over whether its party president is seeking the legacy of Mr Vajpayee.  It’s likely to draw comparisons to the party’s prime ministerial candidate Narendra Modi, who in 2011 declined to wear a skull cap offered to him.
So is Rajnath Singh positioning himself as the BJP’s next Vajpayee? In Lucknow, with 25 percent Muslims, it’s a name he invokes repeatedly on the campaign trail. Top Shia cleric Maulana Kalbe Jawad, one of the Muslim leaders Mr Singh met in Lucknow, told NDTV yesterday, “We are scared of Narendra Modi, but Rajnath Singh has the acceptability of Vajpayee.”
In this ancient city of Nawabs that the BJP has ruled since the 1990s, Atal Bihari Vajpayee, five-time MP, remains the uncrowned king long after he has faded from active politics. And Rajnath Singh, the BJP candidate this time, is clearly aiming to cast himself in his mould in this historically multi-cultural, multi-religious constituency, seeking a Vajpayee-esque acceptability and a moderate image for himself.  Even his chief campaign manager is Mr Vajpayee’s former personal assistant Shiv Kumar.
At Lucknow’s civil court, he delivered a speech littered with references to the BJP’s former PM.  “We need leaders like Vajpayee, not economists to lead us. I will try my best to continue the tradition that Lucknow has been used to under him,” he promised.The slogans at the public meeting were telling – not just “Abki baar Modi Sarkar (This time a Modi government)” but also, “Atal Bihari Vajpayee zindabad, zindabad (Long live Atal Bihari Vajpayee).”
Mr Singh offered prayers at the city gurudwara and garlanded a statue of BR Ambedkar, attempting to reach out to Dalits. And he met every Shia and Sunni cleric who mattered, days after the BJP accused Sonia Gandhi of being “communal” for a similar meeting with the Shahi Imam in Delhi.
Amid charges of hypocrisy from the Congress, Rajnath Singh insisted his meeting was different. “You cannot compare the two meetings. I have not asked for any appeal on the basis of religion. I am not looking for political fatwas. I will meet everyone of all faiths,” he told NDTV.How Lucknow’s 4.5 lakh Muslims vote will be closely watched. In the age of Narendra Modi, will they consolidate behind the Congress candidate Rita Bahugana Joshi? Or will they get divided? Ms Joshi lost to BJP candidate Lalji Tandon in 2009 by 40,000 votes. The BJP has not given a single ticket to a Muslim candidate in UP this time and has fielded only five Muslim candidates all over the country.
In old Lucknow, people recount how Muslim clerics read the Koran for Mr Vajpayee after his victory in 2004. “Vajpayee was a different person… He was loved for his personality, his individuality…And none other than Vajpayee could be as popular in Lucknow…Whosoever he may be,” says an elderly former Nawab, Jaafer Mir Abdullah. Mehru Jaffer, Editor of Lucknow Observer, a local daily, says, “Rajnath Singh and Vajpayee are two different species. Vajpayee for us represented the Ganga Jamuna Tehzeeb. He would never have said this is our parampara and this is not. The BJP must know … both the pagdi and the skull cap are our parampara.”
Deepak Sharma, who runs the Sharma Tea Corner, Lucknow’s oldest tea stall, still remembers the day Mr Vajpayee dropped in for a samosa. “Vajpayee’s influence in Lucknow is like a seed sown long ago. Now everyone is benefiting from the flowers,” he says. He is sure that Rajnath Singh will win in Lucknow and says “full credit” will need to go to Atal Bihari Vajpayee.