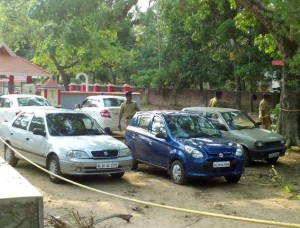 KOLLAM: Three cars, loaded with explosives, were seized by the police from the precincts of the Sharkara Devi temple in Paravur, about 500 meters away from the Puttingal Devi temple, where a fireworks explosion in the early hours of Sunday killed more than 100 people.
Kollam City Police Commissioner P. Prakash said the cars, found parked in a suspicious manner, came to their attention on Sunday night after some nearby residents made complaints.
On Monday morning, when the police cordoned off the area and examined the cars, they found that the vehicles were loaded with explosives that can get activated even at the slightest spark. Some of them were high intensity explosives, Mr. Prakash said.
Since the State police did not have the expertise to defuse them, the task has been handed over to the Petroleum and Explosives Safety Organisation experts, who are camping at Paravur in connection with the investigation into Sunday’s explosions.
Mr. Prakash said two of the cars had registration numbers of Kollam district and one of Thiruvananthapuram district. The ownership of the cars is being verified with the Transport Department authorities.