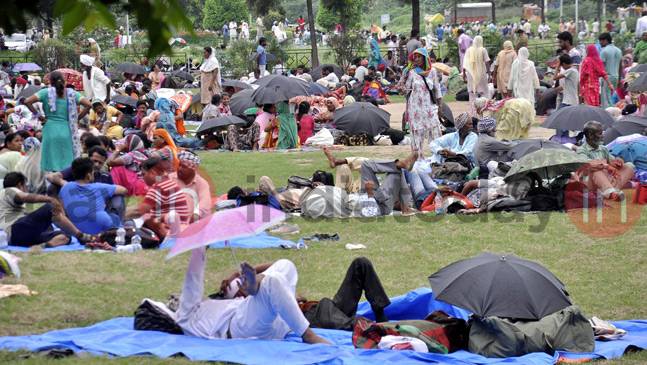 SIRSA/ CHANDIGRAH:  The estimated 30,000 followers of self-styled guru Gurmeet Ram Rahim Singh, who were inside the headquarters of his sect, the Dera Sacha Sauda in Haryana’s Sirsa, started moving out this evening.
Around 6 pm, the security forces brought 100 state transport buses to ferry them out, resolving the stalemate that had been in continuing since Ram Rahim’s conviction in a rape case on Friday. The Haryana police said they have made sufficient security arrangements to ensure peace tomorrow in Rohtak and Sirsa – the only two towns in the state that are still under curfew. The Dera chief will be sentenced at 2 pm inside a jail in Rohtak, where he is lodged.
Here are the top 10 updates in this big story: 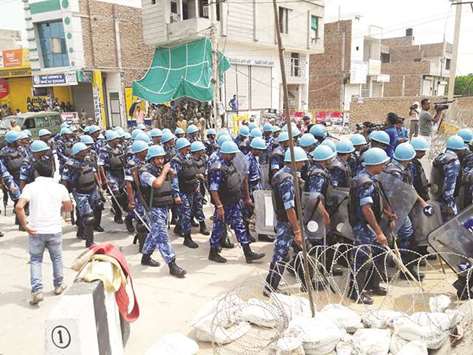 Rohtak has been placed under multi-layered security; 28 companies of paramilitary troops have been stationed in the town and Dera followers are not being allowed to enter the district. The Punjab and Haryana High Court ordered yesterday that the trial court judge, Jagdeep Singh, be flown to Rohtak.
A case of sedition has been filed against two of the key leaders of Dera following news reports that said they were instigating crowds in Panchkula on Friday, said senior Haryana police officer BS Sandhu.
The police said a Special Investigation Team will be asked to investigate Friday’s violence in view of the weapons found during searches. Security forces recovered sticks, rods and material to make petrol bombs In searches at more than 130 Dera campuses in Haryana and Punjab. Near the Sirsa campus, two AK-47s and a pistol were found in a car.
After a Panchkula court found Ram Rahim guilty of raping two women followers on Friday, his supporters erupted in violence that left 38 people dead. More than 500 people were arrested in Haryana since. This morning, a media van was attacked by suspected followers of Ram Rahim, several kilometers from the Dera headquarters in Sirsa. More than a lakh of Ram Rahim’s followers had congregated in Panchkula ahead of the court’s Friday verdict. The High Court in a severe reprimand, told the Haryana government, “You let Panchkula burn for your political motives.”

In his monthly radio address Mann ki Baat, Prime Minister Narendra Modi today said, “Violence in the name of faith will not be tolerated, whether it is faith based on community, political ideology, individual or tradition”. He promised that action will be taken against anyone who took the law in their own hands

Five guards from Ram Rahim’s Z-Plus security detail have been arrested after they tried to obstruct the policemen who were taking Ram Rahim to jail. The bodyguards wanted to take the convicted man to jail in his car,” Haryana police chief BS Sandhu said. They have been accused of attempt to murder, sedition, helping a criminal escape and under the Arms Act.
In view of the widespread violence after Ram Rahim’s conviction, the Punjab and Haryana court suggested that the many properties of his sect will be seized to pay for the massive damages caused to public property. The state police today said they have started identifying the properties.ndtv.