VARANASI: BJP workers in saffron caps filled the streets outside Varanasi’s historic Benaras Hindu University for protests today, escalating a showdown with the Election Commission over the party’s prime ministerial candidate, Narendra Modi, being refused permission for a large rally in the city from where he is contesting his first parliamentary election.
This morning, Mr Modi tweeted that “It is unfortunate that EC is not concerned about the institution’s neutrality.” Apart from the rally, Mr Modi, 64, was scheduled to hold prayers on the banks of the Ganga and meet with 150 citizens at a local hotel. The Election Commission sanctioned those functions last evening, but the BJP said they stood cancelled because the clearances came through too late to be able to advertise them. 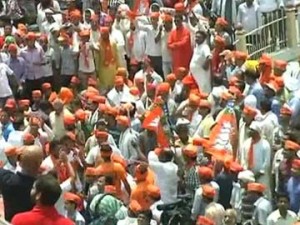 “My profound apologies to Ganga Maa for not being able to perform Aarti today,” Mr Modi tweeted, drawing a swift retort from his competition. “If you only want to do Ganga arti, you don’t need permission. You need EC permission for political activities,” said Mr Kejriwal, also on Twitter.Mr Modi will land by helicopter to address a rally on the outskirts of Varanasi. Later, he will drive through the city to his party’s headquarters in a large roadshow that BJP leaders said “will be larger than any rally.”
Senior party leader Arun Jaitley and Mr Modi’s top aide Amit Shah are lead protests at the university against the Election Commission.
The Election Commission has said it is “surprised and disappointed” by the BJP’s plans.Varanasi votes on May 12 on the final day of the staggered national election. Ajay Rai of the Congress is up against Mr Modi and Mr Kejriwal.Substantiating its claim of “bias”, the BJP alleges that Congress Vice-President Rahul Gandhi has been allowed by the Election Commission to hold a road-show in Varanasi on Saturday.  Mr Gandhi’s arrival in Varanasi is a tit-for-tat move – earlier this week, Mr Modi campaigned in the Congress leader’s constituency of Amethi for BJP candidate Smriti Irani.