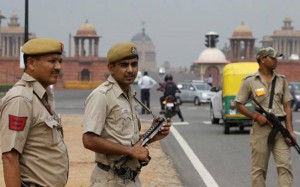 NEW DELHI: The national capital was on Sunday put on high alert and security was beefed up at vital installations, important buildings and crowded places after Delhi Police received inputs about a potential terror strike in the city by 10 suspected LeT and JeM militants who are learnt to have entered India through Gujarat.

In view of the input, Delhi Police on Sunday heightened its vigil near iconic buildings and military installations in the national capital and security arrangements were stepped up near prominent malls, hospitals, schools and colleges in the city, a police source said.

He further said, the input specifically mentions about 10 militants of LeT and JeM outfits having entered India via Gujarat and that they could carry out a terror strike in Delhi.
The Special Cell and Crime Branch of Delhi Police have been briefed about the input separately, so that activities of gangs operating in and around the city and elements with suspected terror links can be monitored.
The police are also ensuring that CCTV cameras at all places with high footfall, like popular markets in the city and metro stations are functional. Patrolling across the city has been intensified, the source added.
A high alert was sounded in Gujarat on Saturday after Pakistan National Security Adviser (NSA) Nasir Khan Janjua communicated to his Indian counterpart Ajit Doval about the terrorist infiltration.Four National Security Guard (NSG) teams were rushed to Gujarat following the input.