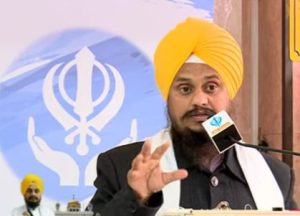 CHANDIGRAH: Tension between the Christian missionaries and the Akal Takht jathedar Harpreet Singh over conversions in Punjab has subsided a bit following a decision of both the sides to form a joint committee of both the Sikh and Christian leaders  to resolve religious issues and urge the government to scrutinise funding of missionary events. The decision was taken following a meeting of Christian missionaries with the Akal Takht jathedar and other Sikh leaders at the Golden temple.
Giani Harpreet Singh is believed to have told the Christian leaders to initiate legal action against “fake” pastors, who have been behind the conversions in the rural parts of the state. Besides various Sikh activists including Parampal Singh and Satinder Singh, Takht Kesgarh Sahib Jathedar Giani Raghbir Singh was also present in the meeting.
PK Samanta Roy, Bishop, Diocese of Amritsar, Church of North India (CNI), blamed a section of people  who call themselves as preachers, pastors, bishops or prophets, and have been indulging in conversions. ” Whoever indulges in this kind of practice is not Christian. I would say he is not even a human being. Disrespecting any other religion is nobody’s right. This is not only a disrespect to your religion (Sikh) but also of ours. We disown this practice” the Bishop said.
The meeting took place after an incident in which a Church was vandalised by unknown persons and a car of pastor was set afire near Tarn Taran. The Akal Takht jathedar had demanded that the state government should pas an anti-conversion law to stop such incidents. “We want to maintain peace and brotherhood. We have had a long tradition of living and working together. We don’t allow any group to disturb that peace. We will give the people on wrong path a chance to improve first”, said a pastor.
Amid the row over alleged forced conversions of Sikhs into Christianity, Akal Takht acting jathedar had earlier met Bishop John Ashish, metropolitan commissary of Anglican Church of India, Burma and Ceylon, in Anandpur Sahib.