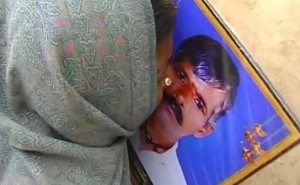 BOORGUPALLY( Telangana) :  Till this week, OP Dhankar, a minister in Haryana, was unheard of in this small village in  Telangana where farmers spend hours in 40-degree heat trying to cultivate cotton, paddy and maize. Today, a 23-year-old says that Mr Dhankar owes him a public apology.
The men have never met. But less than a month ago, Narasimha’s father, a cotton farmer, killed himself.  Mr Dhankar recently described farmers who commit suicides as “cowards” – an insult that Narasimha is unwilling to tolerate.
His father, Kunta Yelliah, was a well-respected farmer who expanded the small plot he owned by leasing adjoining land. The money was never abundant, but he managed to arrange matches and festive wedding ceremonies for his two sisters, and then his daughters. His sons were sent to school.And then, his crop failed – heavy rains washed it out two years ago, drought withered his fields the next.
Three weeks ago, Kunta Yelliah hanged himself. He was 53.
His wife Narsavva says the farmer was defeated not just by insurmountable loans but by the humiliation he felt about the unpaid debt. “Those who had given him the land on lease said ‘You haven’t paid for the last two years.. give us the land back and the money too’. He was feeling very bad about it. I told him we should sell the 1.5 acres that we own and repay them.”Yellaiah’s brother-in-law says that would have settled the debt. “But he thought why should I live if I can’t even safeguard the land given to me by my father?”
The government’s planned land reforms which have it confronting a united opposition  and the escalating rural distress have turned farmers into a political headline. With at least a dozen farmer suicides in recent weeks, Mr Dhankar, a minister in the Haryana government, compared those farmers to cowards, prompting severe reprimands, including from his own party.
For Yellaiah’s son, the tug-of-war over between parties to establish themselves as the real champions of farmers’ rights is a deep offense. “Politicians can’t sit somewhere and make statements about farmers losing courage and killing themselves. It is wrong. Farmers work from early morning till late night. Sometimes, they then go out at night and work till  the next morning because water and electricity are made available at night. They wait an entire year to harvest a crop, despite all uncertainty. How can they say farmers lack courage?”
At least 700 farmers have killed themselves in Telangana though it is, as India’s youngest state, just 10 months old. In the spiraling crisis, the state’s Agriculture Minister  provoked wide anger by traveling to Israel with a  delegation of rich farmers, all of them law-makers, for an 8-day trip to learn about new agricultural technologies.