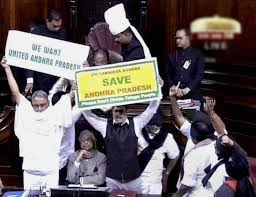 NEW DELHI : Five union ministers from Andhra Pradesh met senior BJP leader LK Advani to persuade the main opposition party to oppose a bill to create Telangana by dividing their state, which the Centre is determined to push through Parliament this week.
A short distance from Parliament, Jagan Mohan Reddy and his YSR Congress party supporters, who have come in two trains to Delhi, have began a protest against Telangana.The five ministers, including Chiranjeevi, Pallam Raju and Purandeswari, are from the non-Telangana Seemandhra region that is opposed to the division of the state. They have said they will try to stop the Telangana bill at all costs.
Mr Advani’s BJP said it backs Telangana but will not support any move to push legislation in the din of protests and clashes in Parliament. Last week, protests against Telangana led to some of the worst scenes ever witnessed in Indian Parliament with an expelled Congress MP, L Rajagopal, using pepper spray on his colleagues in the Lok Sabha and other MPs yanking mics, and breaking a computer. 16 MPs were suspended for the violence on Thursday.
The violence began just as Home Minister Sushil Kumar Shinde introduced the Telangana Bill. The BJP and the Left have criticised the manner in which the bill was brought. BJP said the government had lost the right to try and clear any legislation other than the interim budget.Jagan Mohan Reddy is protesting along with scores of supporters at Jantar Mantar in the capital. “An unwilling state is being broken against the will of the assembly, against the will of the people,” Mr Reddy told NDTV.
Eight trainloads of people from Andhra Pradesh have arrived in Delhi to participate in protests against Telangana.Three key metro stations have been shut till evening due to security concerns over protests in the most protected VIP zone in the heart of the city.
Anticipating disruptions over Telangana when Finance Minister P Chidambaram presents his interim budget, the last before the national election, the Centre has taken unusual steps like preparing for an uninterrupted speech from a studio near the Lok Sabha.The Centre has five days to pass the bill that will create India’s 29th state. The ruling Congress hopes to reap electoral dividends from Telangana in the national election, due by May, but is facing opposition from its leaders in the residuary region, Seemandhra, including Chief Minister Kiran Kumar Reddy.
Seemandhra is worried about a smaller share of water, power and revenue from Telangana once the new state is created.