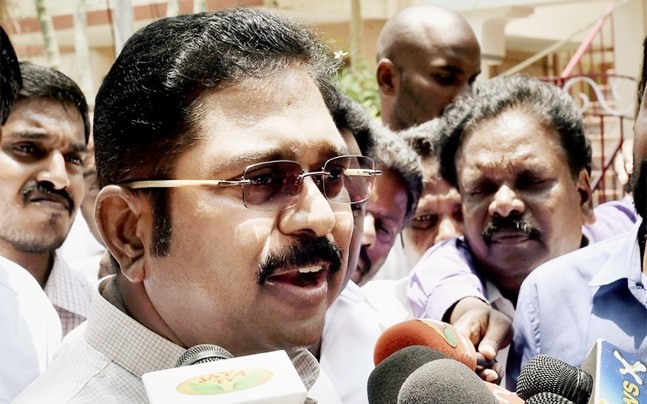 CHENNAI : In a major blow to ousted AIADMK deputy general secretary TTV Dhinakaran, the Speaker of Tamil Nadu’s State Assembly, P Dhanapal, on Monday disqualified 18 MLAs loyal to him. who had withdrawn support to Chief Minister Edappadi Palaniswami, were on Monday disqualified from their posts by Assembly Speaker P. Dhanapal.The rebel MLAs, loyal to Dhinakaran, had been demanding the removal of EK Palaniswami as Chief Minister of Tamil Nadu.

Announcing this, Assembly Secretary K. Boopathy said in an official release that since the Speaker has disqualified them under Tamil Nadu Legislative Assembly (Disqualification on Ground of Defection) Rules, 1986, the 18 AIADMK MLAs have lost their MLA posts.

Only last week senior lawyer Kapil Sibal, who appeared for the DMK, told the Madras High Court that he feared the Speaker could disqualify these legislators and conduct a floor test to facilitate Mr. Palaniswami to prove his majority in the Assembly.

With the disqualification of the 18 MLAs the collective strength of legislators in the 234-member House has come down to 215 (including the seat that fell vacant after the demise of Jayalalithaa). Mr Palaniswami now needs the support of just 107 MLAs, excluding that of the Speaker, to prove his majority and he can easily sail through a floor test.

Thanga Tamilselvan, Senthil Balaji, P Vetrivel and K Mariappan are among those who have been disqualified. 18 MLAs backing TTV Dhinakaran stand disqualified with effect from today, under 1986 Tamil Nadu Assembly Members party defection law., the Speaker said in his order.

Dhinakaran had earlier moved the Madras High Court amid apprehensions about possible disqualification of the ruling AIADMK MLAs backing him by the Speaker.The Madras High Court had then ordered that no floor test be conducted in State Assembly till September 20.

Dhinakaran had last week warned that he will throw the incumbent K Palaniswami-led government in Tamil Nadu after the ruling AIADMK General Council removed him and his aunt VK Sasikala from top positions in the party. ”Most of the ministers are scared that they will lose elections and that’s why they are accusing us of conniving with the DMK,” TTV Dhinakaran said while reacting to the developments.

TTV Dinakaran also challenged his rivals to hold fresh elections if they felt that they enjoyed popular support.  ”You (EPS-OPS) claim that you have support of party workers, so if you have guts let us face fresh elections,” TTV Dhinkaran said on the crucial AIADMK meet.

”Now, I will ensure that this government (Tamil Nadu) is thrown out of power,” Dhinkaran warned, toughening his stand on the move to curtail his powers by the two united factions of the ruling party.The reactions from Dhinakaran came shortly after the AIADMK cancelled the appointment of jailed VK Sasikala as party General Secretary.