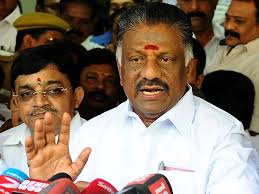 CHENNAI : In Tamil Nadu, O Panneerselvam has announced dissolving of a seven member panel for holding merger talks between two rival AIADMK groups. Virtually bringing down the curtain on the merger of the two rival pary groups, AIADMK (Puratchi Thalaivi Amma) camp leader Panneerselvam last night made the announcement at a meeting of party functionaries in Chennai. He blamed the opposition camp AIADMK (Amma) for irresponsible statements.

Though both sides publicly announced their willingness to hold talks, the Panneerselvam faction remained firm on its demand for a CBI probe into the death of Jayalalithaa. He also demanded the removal of AIADMK chief VK Sasikala and her family members, including Deputy General Secretary TTV Dhinakaran, from the party as a precondition for talks.

Panneerselvam’s announcement came as no visible progress was made in the proposed talks. None of the demands had been met, though a section of ministers revolted against Dhinakaran in April, asking him to stay away from party affairs. He had also announced then that he was stepping aside. However, he had recently, upon release on bail in the Election Commission bribery case, said he would continue with party work.