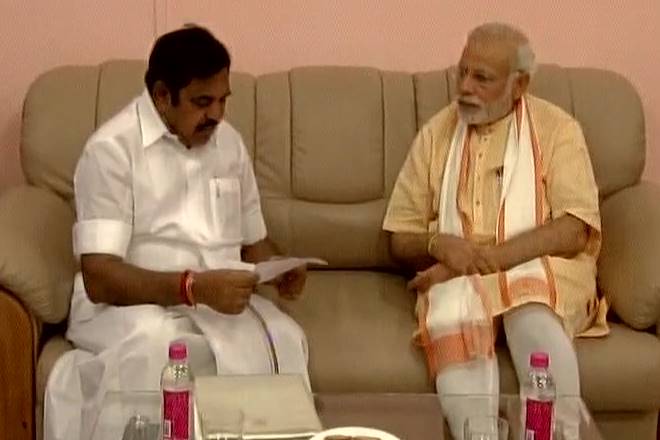 NEW DELHI : Amid growing chorus around the probable merger between the warring factions of the AIADMK, Tamil Nadu Chief Minister E Palaniswami met Prime Minister Narendra Modi in New Delhi today. In a meeting that lasted 20 minutes, the senior AIADMK leader is reported to have briefed Modi on the merger plans within the party, which is likely to be concluded by this weekend.

However, Mr. Palaniswami, who is also the headquarters secretary of the AIADMK (Amma), told reporters that he had only discussed the issue of exemption for Tamil Nadu from the purview of the National Eligibility-cum-Entrance Test (NEET). Saying that “No talks have been held between the two sides,” Mr. Palaniswami, however, hoped that the two factions would reunite.

Both the AIADMK faction leaders – EPS, as Palaniswami is known, and former Tamil Nadu Chief Minister O Panneerselvam (OPS to his supporters) are in Delhi. While the leaders were in the national capital to attend the oath taking ceremony of Vice President Venkaiah Naidu, speculations are rife that the two leaders will make some reconciliatory moves.
Ahead of the possible merger, AIADMK on Thursday booted out Deputy General Secretary TTV Dinakaran, who is the nephew of jailed leader and current party chief VK Sasikala. A resolution passed at the AIADMK meeting declared Dinakaran’s appointment as “improper, unacceptable and invalid”, clearing the decks for a possible unification of the two factions. The AIADMK meeting also nullified all the appointments of office bearers and other decisions made by Dinakaran.

The two AIADMK factions will have to unite if they need to get back the party’s popular “two leaves” election symbol that has been frozen by the Election Commission. Minus the frozen symbol, AIADMK leaders admit they will have problems taking on the DMK in the upcoming local body polls. The sources say that the Bharatiya Janata Party (BJP) has been nudging the two factions to unite — and also join the BJP-led National Democratic Alliance formally.

This is the first time that a document helping the case of the Panneerselvam camp has been forthcoming from the other faction, pointing to “rather hectic attempts” to forge a merger. Sources also said Mr. Palaniswami had returned to Chennai on Friday evening. Mr. Panneerselvam, who hasn’t yet sought an appointment with the Prime Minister, will remain in Delhi for the weekend.( with Agency inputs).