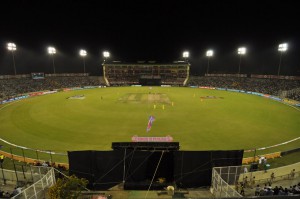 NAGPUR: The sixth edition of the World T20 cricket tournament, to be held in India for the first time, will begin in Nagpur tomorrow with two qualifying matches.
In the opening game,13th-ranked Zimbabwe will take on 14th-ranked Hong Kong in Group B at 3 p.m. In the second fixture, also in Group B, No. 9-ranked Afghanistan and 11th-ranked Scotland will clash at the same venue later in the evening at 7.30 p.m.
The opening two Group A qualifying matches will be played at Dharamsala on Wednesday. The Second Round of the tournament, known as Super 10, will kick off on March 15, also in Nagpur, when India go head to head with New Zealand in Group B. The other teams in the Group are Pakistan and Australia. They will be joined by the qualifying team.
The sides in Group A of the Super Ten Round are: South Africa, England, the West Indies, and Sri Lanka. They will also be joined by the qualfying team.
The final will be played at the Eden Gardens on April 3. India won the inaugural World T20 tournament in South Africa in 2007, and finished runner-up in Bangladesh two years ago. India today sealed the Number one spot in the ICC Twenty20 rankings after Mahendra Singh Dhoni’s side won the Asia Cup in Mirpur and will now enter the World T20 as the top team.