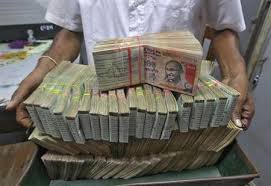 NEW DELHI : Even as the government is expected to disclose the names of close to 60 Indians and entities over tax evasion charges, an Indian newspaper has revealed that the number of Indians holding black money in Swiss Bank are actually double than what has been obtained by the Indian government.
In case of suspected black money abroad, the disclosure related to a list of 628 Indians, who figured on a list of HSBC account-holders that India had got from the French government. However, the news paper, in its investigative report has said that 1,195 Indians are holding account.
The government has recently initiated tax evasion prosecution proceedings against them as part of its crackdown on black money accounts as reported in the HSBC bank’s Geneva branch list.
The paper further said that the account holders with illicit money stashed abroad comprises businessmen, diamond traders, politicians and NRIs/PIOs.
The SIT, headed by retired Supreme Court Judge Justice M B Shah, had said in its last report to the government and the Supreme Court in December 2014 that the black money holders names in HSBC Geneva list will be taken to their logical conclusion soon.
Switzerland, long known as a place with unbreakable banking secrecy, has come under intense global pressure, including from India, amid worldwide efforts to crack down on illicit fund flows.
Armed with information received about its citizens holding secret accounts in Swiss banks, India has been seeking details from Switzerland, but most of these requests were being stonewalled by the European nation on the ground of those being based on stolen data.
Consequently, India has now changed its strategy and has decided to seek details on the basis of independent evidence collected by it on suspected cases of black money stashed in Swiss banks. Switzerland has now agreed to share details if India is able to provide independent evidence.
Last month, Finance Minister Arun Jaitley met his Swiss counterpart Eveline Widmer-Schlumpf and discussed the issue on the sidelines of the World Economic Forum (WEF) Annual Meeting in Davos.Referring to India in detail in its ‘Report on international financial and tax matters 2015’, Switzerland said that India has stepped up its fight against black money.