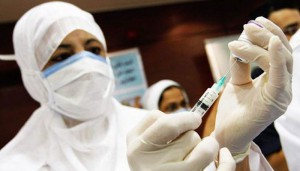 NEW DELHI : The deadly H1N1 influenza virus has returned and appears to have taken epidemic proportion in several parts of the country like Telangana and Andhra Pradesh where two fresh cases were reported on Friday, according to the health department officials.
As per reports, two women, one each from Telangana and Andhra Pradesh, were found infected with swine flu disease.”A woman from Kadapa in AP and another woman from Telangana tested positive for swine flu,” said Dr K Subhakar, the nodal officer for the disease in Hyderabad.
In 2014, 88 cases of swine flu were reported in Telangana and Andhra Pradesh together; of them 22 cases were reported in the last week of December alone.Around 10 persons reportedly died of swine flu last year.
Noting that swine flu is not a life-threatening disease for healthy people, P Sambasiva Rao, Director of Health of Telangana had said that the government had taken various steps for checking the spread of the disease.
“Now with more confirmed cases, I have no hesitation to say that swine flu has taken epidemic proportion. It is time to declare it as an epidemic in order to give the seriousness it deserves,” Dr K Narsimhulu, the swine flu coordinator at the state-run Gandhi Hospital Gandhi Hospital, said seperately.
On December 30, three fresh cases of swine flu were reported in the national capital, taking the number this year to 35, according to the state health officials.
Two women, both aged 33, and a five-year-old boy were the three infected, a Delhi government health department official informs. He said nine cases of swine flu have been reported in Delhi in the December month, including these three new cases.
According to the health department, 35 swine flu cases were reported in Delhi since Jan 1, 2014 till date.
Union Health Minister JP Nadda had earlier assured people that there is no need to panic and the Health Ministry and all concerned departments under it are taking all preventive measures to tackle the swine flu outbreak.
Asserting that the Health Ministry will deal with the situation, Nadda further said that 17 government hospitals in Delhi have adequate medical facilities to deal with the disease.He also urged people to visit the nearest government hospital if any symptoms of swine flu are observed.
Cases of swine flu were also reported from Pune and Indore earlier this month.
Swine flu carrier, the H1N1 influenza virus, is prone to appear in winter months. It is characterised by throat problems, body ache and respiratory complications.Common precautions are washing hands properly, avoiding crowded places and wearing masks.
The medicine generally prescribed for the disease is Tamiflu, which must be taken only after doctor’s prescription.