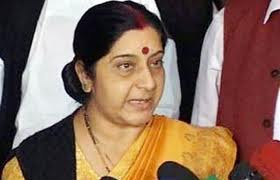 NEW DELHI :External Affairs Minister Sushma Swaraj will undertake a three-day visit to Bangladesh from 25 June during which she is likely to meet the top leadership of that country.
Ms Swaraj, who will be the first senior Indian minister to travel to Dhaka since the change of guard in India, is expected to meet Bangladesh President Abdul Hamid, Prime Minister Sheikh Hasina and Foreign Minister A H Mahmood Ali.
She is also likely to meet top opposition leader and BNP Chairperson Khaleda Zia. Ms Swaraj’s visit to Dhaka is part of Narendra Modi government’s outreach to India’s neighbouring countries as was evident in the invites sent to top SAARC leaders to attend the swearing in of the Prime Minister here on 26 May.
Ms Hasina was among the first foreign leaders to felicitate Mr Modi on his and BJP’s emphatic victory in Lok Sabha elections and had urged him to make Bangladesh as the first foreign destination for an official visit.