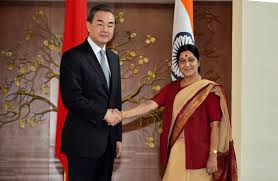 BEIJING: External Affairs Minister Sushma Swaraj on Sunday held talks with her Chinese counterpart Wang Yi here on a host of bilateral and multilateral issues, including Prime Minister Narendra Modi’s first visit to China in May.
The 62-year-old leader, who arrived here yesterday on a four-day visit, met Wang ahead of her meeting with Chinese President Xi Jinping tomorrow.This is Swaraj’s first visit to the communist nation.
“How are you, my friend Wang?” she said as she shook hands with her Chinese counterpart before the talks, in a display of warmth and friendship.A range of bilateral issues, including implementation of Chinese commitment to invest USD 20 billion in industrial parks and cooperation to modernise the Indian Railways, are expected to figure in the talks.
China’s promise to address the USD 38 billion deficit in over USD 70 billion trade in 2014 was also expected to feature during the talks.The Minister’s visit comes within a week of US President Barack Obama’s three-day visit to New Delhi.
Ahead of her visit, a number of articles in Chinese official media came out with critical commentaries accusing Obama of attempting to create a wedge between China and India to further US Asia Pivot strategy to contain the communist nation’s influence in the region.
Before the talks, Swaraj said Modi will visit China in May and she would convey the dates of the Prime Minister’s visit to the Chinese leaders during the talks.
“Modiji is going to come in May. I will give them dates today. This is a preparatory visit,” she told the Indian media after she addressed the Indian Community of Beijing (ICB).
Before meeting Wang, Swaraj met Wang Jiarui, Minister, International Liaison Department of the Communist Party of China (CPC) and discussed party-to-party relations with BJP.
Swaraj is accompanied by new Foreign Secretary S Jaishankar, among other senior ministry officials.
Earlier addressing the ICB at the Indian Embassy here today, Swaraj appealed to the overseas Indian community to join various campaigns like ‘Clean India’, ‘Clean Ganga’ and ‘Beti Bachao Beti Padhao’ initiated by Modi to help India progress.
She also attended the 2nd India-China Media forum at the start of her four-day visit here and proposed a six-point template to build Sino-India ties to realise the common dream of ‘Asian Century’.