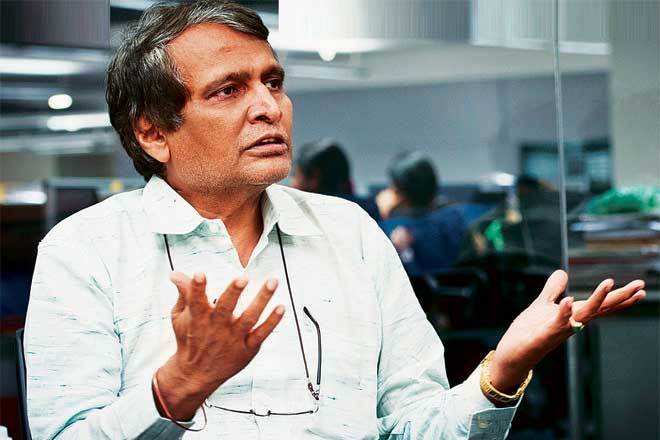 NEW DELHI : Taking moral responsibility for the recent spate of train derailments, Railway Minister Suresh Prabhu had offered to step down, but was asked to wait by Prime Minister Narendra Modi. Prabhu was facing fire after the Utkal Express derailment in Muzaffarnagar on Saturday killed 23 passengers and injured over 60.  Mr Prabhu’s move coincides with intense speculation about a cabinet reshuffle expected next week to fill vacancies in the defence, environment and urban development ministries.
The Minister’s offer to resign came three days after the Railway Ministry decided to send Railway Board Member Engineering and Secretary-level officer Aditya Kumar Mittal on leave holding him responsible for the Utkal Express train accident near the Khatauli railway station near Muzaffarnagar that killed 23 passengers and injured over 80 people.

“I met Prime Minister Narendra Modi taking full moral responsibility. Honourable PM has asked me to wait,” he said on Twitter. he says on Twitter. Railway Minister Suresh Prabhu has offered to resign “taking moral responsibility” for the recent train accidents. “In less than three years as Minister, I have devoted my blood and sweat for the betterment of the Railways,” he stated.

The minister tweeted hours after it emerged that Railway Board chairman AK Mittal had resigned owning moral responsibility. Ashwini Lohani, the chairman of national carrier Air India, will replace him as the new chief of the board that takes important decisions on railways. Mr Mittal, the first board chief to be granted a two-year extension, was reportedly asked to quit after the Utkal Express derailment in Uttar Pradesh.
“Under leadership of PM, tried to overcome decades of neglect thru [through] systemic reforms in all areas leading to unprecedented investment and milestones,” he said. “New India envisioned by PM deserves a Rlys which is efficient and modern. I promise that is the path, on which Rlys [Railways] is progressing now,” he added.
On August 19, the Puri-Haridwar Utkal Express derailed in Uttar Pradesh due to lapses in the track maintenance work. On August 23, 10 coaches of the Delhi-bound Kaifiyat Express derailed in Auraiya district of Uttar Pradesh, injuring 25 passengers. This is the second train derailment in the last five days.

This morning, 10 coaches of the Kaifiyat Express heading towards Delhi derailed after colliding with a dumper, again in Uttar Pradesh. Over 70 people were injured, said reports. Mr Prabhu said he was extremely pained and anguished by the accidents. “In less than three years as Minister, I have devoted my blood and sweat…,” he said in a tweet, adding that he had tried to overcome “decades of neglect”.

Back-to-back crashes in less than a week have provoked opposition calls for Mr Prabhu’s resignation.
Since last year, there have been 186 deaths in train derailments, which is the highest in 10 years. This year, there have been 62 incidents. “Prabhu should resign immediately if he has iota of morality left in him after today’s incident which has left 74 more people injured. It is worst kind of tokenism asking the rail board chairman or any other official to step aside,” said Congress spokesperson Manish Tewari.
with