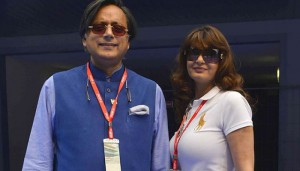 NEW DELHI: Poison has been found in the final viscera report of former Union minister and Congress leader Shashi Tharoor’s wife Sunanda Pushkar, as per sources on Thursday.The viscera report was submitted by AIIMS doctors to Delhi Police nine days ago, on September 30. The three-member team has now submitted the ‘Subsequent Medical Board Opinion’ to the police.
The new report by the panel of doctors, who had conducted the autopsy on her, was prepared on the basis of the findings of the Central Forensic Science Laboratory (CFSL) which had examined Sunanda’s viscera, sources said, as per a News Agency .They said that the team had again concluded like it did in its first report that her kidney, liver and heart were functioning normally and that her death was caused by poisoning.
In July this year, Tharoor had sought a speedy inquiry for a ‘clear and definitive conclusion’ as to the cause of death of his wife in the wake of reported claims by a senior forensic doctor that he was pressurised to manipulate the autopsy report in the case.
Dr Sudhir Gupta, who was the head of the forensic science department of AIIMS and led the panel that conducted Sunanda’s post-mortem, had alleged that he was pressurised to show her death was natural, which he resisted.Sunanda was found dead at a five-star hotel in South Delhi on the night of January 17. This happened a day after her twitter spat with Pakistani journalist Mehr Tarar over the latter’s alleged affair with Tharoor.
Delhi Police set up a Special Investigation Team a few days after Pushkar`s death to probe the case as it occurred a little over three years after the marriage.Under the law, every death of a bride within three years of marriage is viewed with suspicion that it may be a case of dowry death.The case of Sunanda’s death has seen many twists and turns and has been a matter of controversy.
In March this year, the police had said that her viscera report had hinted towards drug poisoning but its findings were still inconclusive to file an FIR in the case.
“The CFSL report has not been able to give much headway into the probe. It rules out poisoning and hints toward drug poisoning,” said a senior police official associated with the probe had been quoted by the a Agency,  as saying then.Police sources had said then that investigators would now take the opinion from the panel of doctors from AIIMS which had carried out an autopsy to shed light into findings of the Central Forensic Science Laboratory report.
The autopsy report had mentioned more than a dozen injury marks on Sunanda`s both hands and an abrasion on her cheek which suggests a ‘use of blunt force’, besides a ‘deep teeth bite’ on the edge of her left palm.The search and seizure memorandum of the police mentioned finding of mix of two drugs – Alprazolam and Excedrin.The probe into the case was handed over to the Crime Branch on January 23 this year. However, the case was transferred back to the South District Police two days later on January 25.

Meanwhile, a day after the controversy over the death of Sunanda Pushkar, the wife of Congress MP Shashi Tharoor, took a new twist, her family on Friday claimed that it knew her death was planned.  Ashok Kumar, a cousin of Sunanda Pushkar, suspected Tharoor’s involvement in the case.When asked about the statement made by Sunanda’s son, from a previous marriage, dismissing the speculation of Tharoor’s role in her death, Kumar said Shiv was scared to speak the truth.
Kumar also said that Pushkar was very upset about the closeness her husband shared with Pakistani journalist Mehr Tarar.