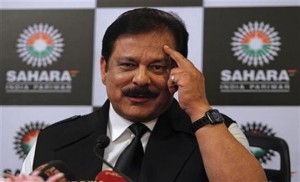 NEW DELHI: Sahara group on Wednesday informed the Supreme Court that its chief, Subrata Roy’s health condition was deteriorating and that he would not be able to survive another summer in jail.

Roy was sent to the national capital’s high-security Tihar Jail on March 4, 2014 and has been lodged there since then as a legal tussle continues over collection of money by two Sahara firms from an estimated three crore investors.
Subrata Roy didn’t go abroad despite Supreme Court’s permission: Sahara According to SEBI’s lawyer Arvind Datar, the amount to be paid to investors by Sahara Group was around Rs 24,000 crore and along with interest, it became Rs 34,000-35,000 crore.

SEBI has been in a long battle with the company in order to recover the money of the investors.Submitting a report to the Supreme Court in the process of selling Sahara assets, SEBI told the court that “selling process to be completed in 4 months time”.
67 properties of Sahara up for sale, process to start next week: SEBI to SC.were up for sale and the process would begin next week.

Earlier in March, the Supreme Court had asked SEBI to initiate the process of selling 87 “unencumbered” properties of Sahara group, whose title deeds are with the market regulator, to generate the bail money for release of its chief Subrata Roy who has been in jail for two years now.