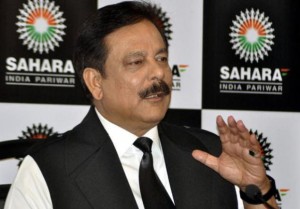 NEW DELHI : Sahara group chief Subrata Roy, who is struggling to raise Rs.10,000 crore to secure bail in the investors fund refund case, is in more trouble with the Income Tax department now approaching the Supreme Court for tax dues worth Rs.7,000 crore since 2011 and also from the proceeds of the sale of his properties.
This comes even as Sahara chief Subrata Roy, who has been in jail for four months now, has sought release on parole for 40 days to finalise the sale deal of three hotels in New York and London to raise the bail amount.
A bench headed by Justice T S Thakur, however, raised apprehensions on Sahara selling international properties and has asked the company to first dispose off its assets which are in the country. Senior lawyer Rajeev Dhavan appearing for Roy, however, submitted that Rs.5,000 crore might not be raised by selling assets situated in the country and pleaded the court to allow him to sell off hotels Dream Downtown and The Plaza in New York and Grosvenor House in London for which negotiations are going on.
“We have no problem in allowing you to sell properties, provided the transactions are fair, genuine and there is no undervaluing of the properties. But we do not know how the valuation of property in the other country is done”, the bench said.
Warning Sahara against selling all its properties for raising Rs.10,000 crore for bail when the total amount they are to pay to investors are Rs.38,000 crores, Justice Thakur told Dhavan: “The property on which the liability may fall tomorrow should not go cheap now. The liability is far too high in comparison to what you are trying to manage immediately”.
The bench asked Securities Exchange Board of India (SEBI) to come out with suggestions on how to monitor selling of overseas properties and posted the case for hearing on Friday.
Sahara also told the apex court that it has so far raised Rs.3, 117 crore which has been deposited with the market regulator.