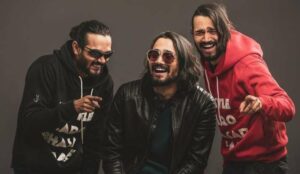 NEW DELHI : YouTube star Bhuvan Bam took to social media on Saturday evening to share the sad news that he has lost his parents to COVID-19 in the last one month.
Mourning the demise of his father Avnindra Bam, who passed away on May 11, and mother Padma Bam, who breathed her last on June 10, Bhuvan shared in an Instagram post: “Lost both my lifelines to covid. Aai aur Baba ke bina kuch bhi pehle jaisa nahi rahega. Ek mahine mein sab bikhar chuka hai. Ghar, sapne, sab kuch. Meri aai mere pass nahi hai, baba mere saath nahi hain. Ab shuru se jeena seekhna padega. Mann nahi kar raha. (Nothing will be the same without Aai and Baba. Everything has been shattered in the past one month. My home, my dreams everything. My aai is not with me, neither is baba. Now I will have to learn from the beginning how to live and I don`t feel like.)”
“Was I a good son? Did I do enough to save them? I`ll have to live with these questions forever. Can`t wait to see them again. I wish the day comes soon,” he added. A statement issued on behalf of Bhuvan’s family reads: “In loving memory of Bhuvan`s beloved father Avnindra Bam (11.05.21) and mother Padma Bam (10.06.21), we are saddened to announce their passing within one month of each other, due to COVID-19. We mourn the loss of these two gentle yet brave souls whose beautiful lives deserve to be beautifully remembered.”
“The past few months have been trying for the family, and we seek everyone`s prayers, support, and sensitivity during this time of grief. To Bhuvan`s fans and well-wishers, we request that you allow him time and space to grieve this immense loss. We carry Aai and Baba`s blessings in our hearts forever.” the statement further says.
This young YouTube star has a crazy fan following. With over 16.1 million YouTube subscribers, it would be more apt to say that Bhuvan Bam is a sensation. Wait, he is also a singer and an actor (Plus Minus with Divya Dutta). BB Ki Vines (Bhuvan Bam Ki Vines) began in 2015 and since then, Bhuvan has been riding high on fame. This one-man-army plays 16 distinctive characters ranging from Sameer to Titu mama. He single-handedly shoots, edits and uploads his videos.
Born in Vadodara, Bhuvan Bam was brought up in Malviya Nagar, South Delhi. This History honors guy who used to sing for 5k per month in a popular Mughlai chai had no idea that one day, his popularity will surpass several Bollywood stars. However, the humble young man says nothing has changed- it is just that more people have started knowing him now. It is this connect and relatability that earned him faithful fans.

How did it start? It was Kashmir floods and some insensitive questions by media that made Bhuvan jump into this act. “I was watching the devastations of the Kashmir floods, and a reporter was asking a local, who had just lost her house and her son, how she was feeling. I was stunned at the insensitivity. I did a 10-15 second satire on it and put it up on Facebook (now deleted)”.

Interestingly, before becoming popular in India, BB Ki Vines became a massive hit in Pakistan and Bangladesh. Narrating his interesting journey to HT Brunch, Bhuvan had said, ”from college WhatsApp groups, my videos travelled to other colleges, and I don’t know how, but suddenly I became very popular in Karachi University! My videos went viral in Pakistan and Bangladesh, but, funnily enough, not in India. India took a lot of time to warm up to my videos!”
For those unversed, the first video that went viral among Indian audience was ‘Valentine’s Week Hutiyapa’ in 2016. So what made him so successful? “Before me, nobody was making two to three-minute videos in Hindi. People could relate to my Delhi accent and the youth found an instant connect with my content. That’s what made it successful,” he had told HT Brunch.
(With Agency Inputs).