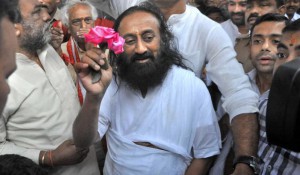 KUALA LLUMPUR: A close aide of spiritual leader Sri Sri Ravi Shankar, on Saturday, claimed that the founder of the ‘Art of Living’ had received death threats in Malaysia from the Islamic State (IS) terror group.
“Sri Sri Ravi Shankar is touring some countries in the far east and he landed in Malaysia yesterday and few days ago while he was in Cambodia, we received threat letters from IS. One was received by the hotel manager, one by the director of Art of Living, one by senior faculty and the content of the letter is very threatening,” said Nakul Dhawan, spokesperson of ‘Art of Living’.
“The authorities have immediately notified the local authorities. We also contacted the Indian Embassy and conducted an investigation to find the source of the letter. We are going ahead,” he said.