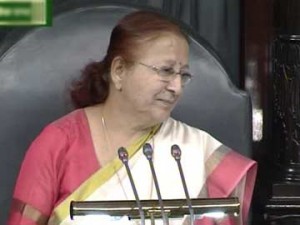 NEW DELHI : Endearingly called ‘tai’ (elder sister), soft-spoken Sumitra Mahajan, an eight-time BJP MP, is a battle hardened leader who has risen from the ranks to the top post of Lok Sabha Speaker. Interestingly, the official name of 71-year-old Mahajan, the eldest and senior-most among women Members of Parliament, in the 16th Lok Sabha MPs’ list is also mentioned as “Sumitra Mahajan (Tai)”.
Mahajan will be the second woman after Meira Kumar to be elected as Lok Sabha Speaker. Starting her political life at the age of 39, Mahajan became the deputy mayor and then an MP from Indore in Madhya Pradesh. She was a Minister of State in the Atal Behari Vajpayee cabinet from 1999 to 2004, holding different portfolios of Human Resources, Communications and IT and Petroleum and Natural Gas. A lawyer-turned-politician, Mahajan is known for her trademark simplicity, honesty and clean image besides her impeccable winning record at the hustings.
An active parliamentarian, she has not only headed important committees, but has also been a keen debater and avid questioner inside the House, often seen putting ministers on the mat with her calm but firm interventions. The mild-mannered Mahajan has over the years emerged as a force to reckon with in Indore where she never lost since she first became an MP in 1989 and a generation of opposition leaders have been waiting to trounce her. She, however, had lost the Indore Assembly election thrice before becoming an MP.
Mahajan won her Lok Sabha seat for the eighth consecutive time in this election by an impressive margin of 4.67 lakh votes. Born on April 12, 1943 in Chiplun of Ratnagiri district in Maharashtra, Mahajan became a municipal corporator in 1982. Within the BJP, Mahajan has grown from being President of the BJP Mahila Morcha in Madhya Pradesh in 1990 to being the national general secretary in 1998.
Sumitra Mahajan is the fourth leader hailing from Maharashtra to occupy the post of Lok Sabha Speaker. An eight-term MP from Indore, Mahajan was born to Usha and Purushotam Sathe in Chiplun in coastal Konkan region of Maharashtra and moved to Indore after marriage to late Jayant Mahajan.
Ganesh Vasudev Mavalankar, who was Speaker of the first Lok Sabha from May 15, 1952 to February 27, 1956, was born in 1888 at Baroda in Gujarat but his family originally belonged to Mavalange in Ratnagiri district, also in the Konkan region of Maharashtra, which was then in Bombay. Congress leader Shivraj Patil, who hails from Latur in Marathwada region, was Speaker between July 10, 1991 and May 22,1996.
Shiv Sena leader Manohar Joshi, who also hails from Konkan region, was Lok Sabha Speaker from May 10, 2002 to June 2, 2004.