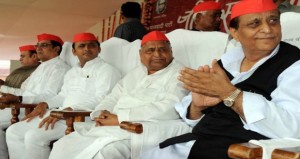 LUCKNOW: Samajwadi Party Senior leader, Azam Khan today said the meeting held at party President Mulayam Singh’s residence focussed on ways to win all seats in the bye-elections of the Uttar Pradesh Assembly.
“Through media, several probabilities were put forward, but in today’s meeting, Netaji (Mulayam Singh Yadav) reviewed the results of the Lok Sabha elections and future strategy. It has been decided by all in one voice that we will work hard and we will ensure that the Samajwadi Party will win all seats in the bye-elections of the assembly,” Azam Khan said.
Khan also said there was no mention of any minister resigning. He said, “It was from you that words of ministers resigning were coming for owning up responsibility for the party’s poor show ( Lok Sabha elections), and it was not coming from us. So, it starts from you and ends with you only.”
A meeting of UP ministers was convened today at Samajwadi Party (SP) supremo Mulayam Singh Yadav’s residence to take stock of the situation following the party’s dismal show in the Lok Sabha elections.
The SP managed to win only five out of the 80 seats in the Lok Sabha elections, out of which Mulayam Singh Yadav won two seats. The rest were won by his daughter-in-law, Dimple Yadav and his two nephews.