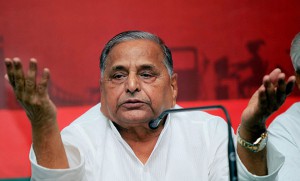 LUCKNOW: The Samajwadi Party (SP) Friday announced the names of six party candidates for the Rajya Sabha elections scheduled for next month.The party’s central parliamentary board at a meeting in the national capital cleared the names of Ram Gopal Yadav, Javed Ali, Chandra Pal Singh Yadav, Neeraj Shekhar, Ravi Prakash Verma and Tanzeem Fatima.
While Neeraj Shekhar is the son of former prime minister Chandra Shekhar, Fatima is the wife of state urban development minister Mohd Azam Khan and Ram Gopal Yadav is the cousin of party chief Mulayam Singh Yadav.Contrary to speculation, former party leader and outgoing Rajya Sabha member Amar Singh was not given a ticket though he had lobbied hard for it.
In the past few days he had met both Mulayam Singh and Chief Minister Akhilesh Yadav. But Ram Gopal Yadav and Mohd Azam Khan were bitterly opposed to the re-entry of Amar Singh and their will prevailed in the end, party sources said.
However, in an anti-climax, while Azam Khan succeeded in exhibiting his political muscle within the party by getting the parliamentary party to name his wife, Tanzeem Fatima turned down the offer after thanking the national leadership of the SP.Earlier too, the state government had offered Fatima a rank equivalent to a cabinet minister by naming her chairperson of the UP Higher Education Service Commission but she had then also turned down the offer.
Polling for 10 Rajya Sabha seats from Uttar Pradesh is scheduled Nov 20.
All six candidates of the SP, based on its strength in the state assembly, are likely to sail through comfortably.