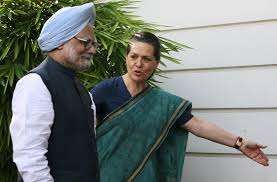 NEW DELHI: In an attempt to corner the Narendra Modi government, Congress president Sonia Gandhi and former prime minister Manmohan Singh on Tuesday will march with leaders of at least ten parties from Parliament House to Rashtrapati Bhavan to protest against the Land Acquisition Ordinance.
Along with the Congress, Janata Dal (United), Trinamool Congress, Samajwadi Party, CPI(M), DMK, INLD and some other parties will participate in the protest march.The Opposition parties have united over the contentious bill and are trying their level best to project the Modi-led BJP as an anti-farmer party.
The leaders of the parties will submit a memorandum against the new land bill to President Pranab Mukherjee.Sources in the Opposition said that Congress is playing a key role in the protest including the finalisation of the draft of the memorandum.
Former PM Manmohan Singh, JDS chief HD Devegowda, CPI-M’s Sitaram Yechury, CPI’s D Raja, Trinamool Congress leader Dinesh Trivedi, SP’s Ramgopal Yadav, DMK’s Kanimozhi, INLD’s Dushyant Chautala and RJD’s Prem Chand Gupta are expected to participate in the march.
Sonia’s attending the Opposition march tomorrow is significant as neither she nor Rahul Gandhi on sabbatical, was here today to lead the Congress protest against land acquisition at Jantar Mantar, which was a culmination of its padyatra from Bhatta Parsaul village that began four days back.
Manmohan Singh’s attending the event is also significant as it comes days after the Congress chief led a march from party headquarters to the former Prime Minister’s residence to express solidarity after Singh was summoned in a coal scam case.
Social activist Anna Hazare has appealed to the opposition parties to resist the government’s attempts to pass the Bill in Rajya sabha when introduced in the Upper House.
Meanwhile, the Modi Government intends to have another round of discussion with Opposition on the Land Bill before moving it in Rajya Sabha as parties including Congress, the Left and some others have escalated the protest against the measure.
Earlier this month, the Lok Sabha passed The Right to Fair Compensation and Transparency in Land Acquisition, Rehabilitation and Resettlement (Amendment) Bill, 2015 amid a walkout by opposition parties even as the government moved nine amendments to address concerns raised by farmers.
Shiv Sena, an ally of the Bharatiya Janata Party, abstained during the voting.
The proposed legislation removes the need for obtaining consent of land-owners and carrying out social impact assessment (SIA) for acquiring land under certain categories — precisely the provisions which had raised the heckles of critics.
The bill faces a tough call in the Rajya Sabha where the government is in minority.The bill will replace an ordinance promulgated by the government in December last year which amended the earlier law passed by the Congress-led UPA in 2013.