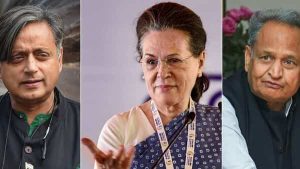 NEW DELHI : Congress party has issued a notification for the party’s presidential election. As per the official notification, party leaders can file nominations from 24 September to 30 September. The voting will be held on 17 October and the results will be declared on 19 October.

The nomination form will be available at the AICC Office, 24 Akbar Road.
The race for the Congress president’s post hotted up on Wednesday with Rajasthan Chief Minister Ashok Gehlot giving a clear indication that he could enter the poll fray and Shashi Tharoor meeting the party’s poll panel chief to enquire about the nomination formalities.
After over two decades, the Congress is set to see a contest for the post of party chief. However, the Congress’ state units in Punjab and Telangana on Wednesday passed a resolution backing Rahul Gandhi for the post of the party president. Over a dozen Pradesh Congress Committees have so far come out in support of Gandhi.
The upcoming polls would certainly be historic as the new president would replace Sonia Gandhi, the longest-serving party president who has been at the helm since 1998, barring the two years between 2017 and 2019 when Rahul Gandhi took over. The party last saw a contest for the post in November 2000. Jitendra Prasada had lost to Sonia Gandhi in 2000 and prior to that Sitaram Kesri had defeated Sharad Pawar and Rajesh Pilot in 1997.
Meanwhile, the Bharatiya Janata Party has taken a dig at the Gandhi family. Recently, the saffron party said that whosoever becomes Congress president, whether Ashok Gehlot or Shashi Tharoor, will only be a “puppet” in the hands of Rahul Gandhi who will be the “main driver”. Recently, there is a growing chorus inside the Congress party regarding the fair election polls. Several senior leaders of the party such as Manish Tiwari, Anand Sharma, Tharoor, and Karti Chidambaram among others raised concern over the election process related to Congress president.

A wave of resentment began in the Congress party after veteran party leader Ghulam Nabi Azad offered his resignation last month. Azad served the grand old party of India for more than five decades. Congress is at its worst political stage at present as it has continued to underperform in both general and state assembly elections. At present Congress is in power in only two states-Chhattisgarh and Rajasthan.

Meanwhile, Rajasthan Chief Minister Ashok Gehlot met with Congress interim President Sonia Gandhi on Wednesday after hinting that he might contest the election for the party president post scheduled to be held on 17 October. According to a Hindustan Times report, the Congress interim president have said that she will not be taking any sides in the upcoming election for the next party president. The conversation took place between Gehlot and Gandhi at the 10 Janpath residence. The report further suggested that Gandhi has made similar statements to Gehlot fellow contender Shashi Tharoor while granting him the nod to file nomination for the polls.
The meeting between Gehlot and Sonia Gandhi comes just a day before the Congress’s central election authority would issue a notification for the All India Congress Committee (AICC) presidential poll. Thiruvananthapuram MP Shashi Tharoor had met Sonia Gandhi two days ago to discuss his candidature for the party president election. Notably, Tharoor is also part of the G-23 leaders who wrote to Gandhi  on the need for pivotal changes in how the party is functioning.
While talking to reporters in Delhi, Gehlot, in a clear indication that he could throw his hat in the ring for the Congress presidential poll, said he will file his nomination if the party people wish so and fulfil any responsibility given to him.”The party and the high-command have given me everything. I have been on posts for 40-50 years. For me, no post is important, I will fulfil any responsibility given to me,” he said.
After more than two decades, the Congress is likely to see a contest for the post of its chief, with Shashi Tharoor looking set to enter the fray after his meeting with Sonia Gandhi and Gehlot indicating that he will throw his hat in the ring if Rahul Gandhi does not agree to take on the party’s reins.The process of filing nominations for the election will be held from 24-30 September. The election, if there is more than one candidate, will be held on 17 October, while the counting of votes, if necessary, and the declaration of results would be on 19 October.
( Bureau Report with Media Inputs).