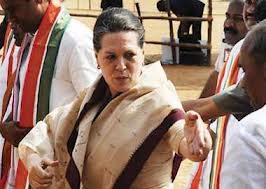 RAE BARELI/NEW DELHI : Sonia Gandhi has sharply criticized the Narendra Modi government, which completes 100 days in power on Wednesday, on price rise. “Why don’t you ask them?” the Congress president said, gesturing to a crowd of supporters in her constituency Rae Bareli, when reporters asked her to comment on the Modi government’s 100 days.
“Have prices come down? I agree with these people,” she added. Other Congress leaders blamed the ruling BJP for instances of communal tension and questioned the Prime Minister’s “silence”. Party spokesperson Abhishek Singhvi spoke of a “consistent hiatus” in the “preaching and practice” of the Prime Minister and the government.
“Modi’s eloquence and oratory, his using fine words of communal harmony and peace from the ramparts of the Red Fort and then maintaining a complete silence when Ashok Singhal (Vishwa Hindu Parishad chief), Mohan Bhagwat (RSS chief) and (BJP MP) Adityanath do something else,” Mr Singhvi said. He also attacked the government over the Prime Minister’s planned interaction with students on Teachers’ Day on Friday and called it misuse of state machinery for self-propaganda.
“I don’t think any Prime Minister or President has by a diktat said students from class one must stand, sit and listen to him. Thank God, they have spared the students from KG,” Mr Singhvi remarked.
Building up to the 100-day mark, various ministers have sought to showcase what they describe as their achievements and held them up as a vast improvement on the previous Congress-led regime. CPI-M leader Brinda Karat criticized the Modi government on inflation and train fare hike. “We have seen only one change and that is minimum governance and maximum PMO (Prime Minister’s Office),” Ms Karat said.