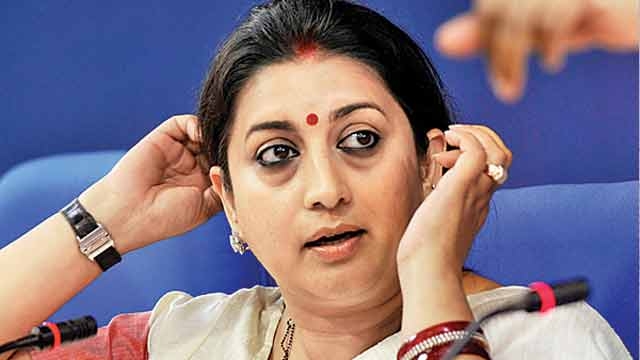 NEW DELHI : A day after Union Minister Venkaiah Naidu resigned as a cabinet minister, union minister Smriti Irani was given additional charge of the Information and Broadcast Ministry today, while Narendra Tomar was given the additional responsibility of the Ministry for Urban Development. Prime Minister Narendra Modi confirmed the same through a tweet.
M Venkaiah Naidu resigned as union minister last night after he was named by the BJP as its vice presidential candidate against Mahatma Gandhi’s grandson Gopalkrishna Gandhi, the opposition’s nominee. Rural Development Minister Narendra Singh was handed over the charge of Urban Development.
The rejig took place after senior party leader and NDA vice presidential candidate Venkaiah Naidu resigned from his ministerial responsibilities on Monday.  The Office of Prime Minister of India confirmed the report and tweeted, “Shri @MVenkaiahNaidu has resigned from his ministerial responsibilities. Additional charge of @Moud_India has been given to Shri @nstomar.”

“The additional charge of the Ministry of I&B has been given to @smritiirani,” it added. Earlier in the day, Naidu met veteran BJP leaders Murli Manohar Joshi and LK Advani before he arrived in the Parliament House to file his nomination for the vice-presidential election.