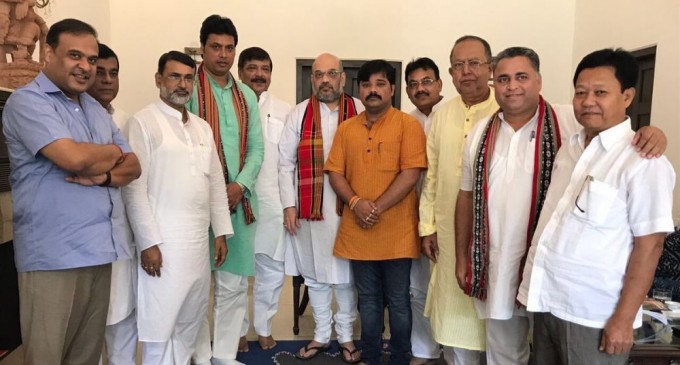 AGARTALA: Six Tripura legislators sacked by Mamata Banerjee from her Trinamool Congress after they supported Ram Nath Kovind for President of India last month, will today join the BJP. This will give the BJP its first entry in the assembly in Tripura, ruled for the last 24 years by the Left. The Trinamool is down to zero.
The Trinamool Congress MLAs had openly defied a party order to vote for the opposition’s candidate Meira Kumar in the presidential election, saying they would not back the same person as bitter rival Left. Meira Kumar was fielded by an opposition bloc of 18 parties that included both the Trinamool and the Left.
Five of the six Trinamool Congress legislators from Tripura, who had openly defied party chief Mamata Banerjee’s directives and voted for the NDA candidate in the Presidential election last month, on Saturday met BJP president Amit Shah in New Delhi and confirmed they would join his party without any precondition. The TMC legislators were accompanied by senior Assam minister Himanta Biswa Sarma in his capacity as convenor of BJP’s North-East Democratic Alliance (NEDA) when  they went to meet Shah, with Sarma later tweeting that the Tripura MLAs had “expressed desire to join party unconditionally”.

The six MLAs had quit the Congress and joined the Trinamool last year, protesting against the Congress’ alliance with the Left ahead of the 2016 West Bengal assembly elections.After the presidential election, the Trinamool Congress said it would have no relations with the Tripura MLAs, but the Tripura assembly Deputy Speaker Pabitra Kar has said they are still recognised as legislators of the party.

The BJP has been making steady efforts to gain a foothold in Tripura, one of three north east states where assembly elections will be held next year. The other two are Meghalaya and Nagaland; the BJP has said it is in position to throw out the Congress in Meghalaya. In Nagaland, the party supports TR Zeliang’s Naga People’s Front government. Last month, several Trinamool leaders along with their supporters had joined the party.
A Congress rebel, Ratanlal Nath, is also expected to join the BJP. He too had voted for the BJP’s candidate in the presidential election and could be expelled by the Congress soon.ndtv.