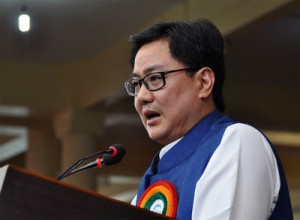 NEW DELHI:  In the wake of protests in Pakistan Occupied Kashmir (PoK), ​Kiren Rijiju, MoS Home, said on Thursday that situation there was disturbing. “Situation in Pak occupied J&K region is always disturbing. Pak has never given any value to maintaining human rights,” he said.
He added, “Not first time that human rights violation is visible in PoK specially by Pakistan Army and their security people,” as per as per News Agency ANI.
Rijiju also said, “We’ve raised this concern, international community should also see and this matter should got to international human rights commission.”
Protesters owing allegiance to Jammu and Kashmir National Students Federation (JKNSF), along with some members of Jammu and Kashmir National Awami Party (JKNAP), reportedly carried out a demonstration rally in Muzaffarabad area of PoK, condemning the “oppressive rule” by Pakistani authorities and the PoK government.PoK erupts in protests over oppressive rule by Pakistan
The protesters raised the issue of job vacancies, which are rare in the area, only being given to Pakistani youth, marginalising Kashmiri youth of the area. Meanwhile, a top Pak official said today that dialogue was the best option between Pakistan and India and the two sides should not think in terms ‘foreclosing any options’.
“During Prime Minister (Narendra) Modi’s visit to Pakistan in December last, it was decided that the two Foreign Secretaries should meet soon. It is hoped that both sides would work out modalities for the Foreign Secretary-level talks,” Foreign Office spokesman Nafees Zakaria said when asked if the word ‘suspended’ correctly defines the current state of the bilateral peace process, as per PTI.
“We need to look ahead and not think in terms foreclosing any options. Both sides are in contact with each other. Once the modalities are worked out Secretary-level talks would take place,” he said.
“Dialogue is the best option! Diplomacy is for interaction and engagement between countries,” he said.Zakaria’s comments came days after Pakistan High Commissioner to India Abdul Basit said the bilateral peace process stands ‘suspended’.

When asked if the position in Islamabad is similar to Pakistan’s High Commissioner to New Delhi, he said, “There is a difference between comments on day to day ground situation as compared to broader policy and future vision and prospects. At our level here in the Ministry, we do not give a day to day running commentary on official policy.”
He said Pakistan was committed to resolving all outstanding issues with India through a sustainable, uninterrupted and meaningful dialogue without any preconditions, in order to address each other’s concerns, and establish lasting peace.