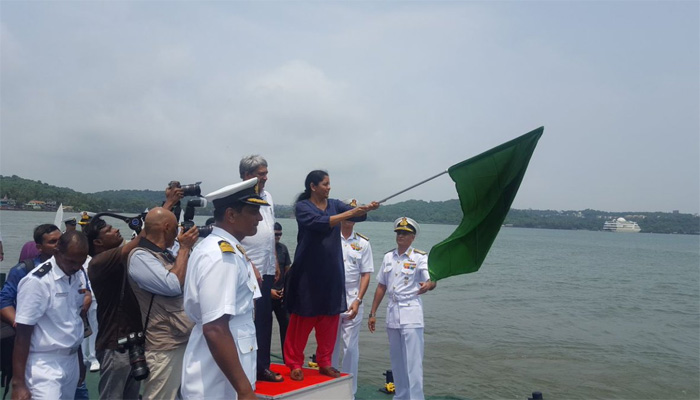 flags off Navy women’s team voyage from Goa for circumnavigation

PANAJI : An all-woman team of the Indian Navy today embarked on a circumnavigation of the globe, with Defence Minister Nirmala Sitharaman calling it a “historic” day for the country. The minister flagged off the first such expedition by the Indian Navy, ‘Navika Sagar Parikrama’, at a ceremony at the INS Mandovi Boat Pool near here.
The six-member women crew will circumnavigate the globe on an India-built sail boat, INSV Tarini, which is being skippered by Lt Commander Vartika Joshi. “This is not an occasion which happens once in five years or once in 10 years. It’s a historic day for India and its navigation history. Globally, I think our women stand out for doing something which most navies haven’t even thought of,” Sitharaman said, addressing a gathering on the occasion.
Goa Chief Minister Manohar Parrikar and Navy chief Admiral Sunil Lanba were also present on the occasion. Sitharaman termed Parrikar, a former defence minister, as an “inspiring political mentor”.

The minister hailed the Navy for coming out with this ambitious and arduous initiative. “It is an opportunity that no one easily gets to be amongst these inspired and motivated women. I appreciate the Navy for the initiative. I appreciate all the mentors who have been instrumental in inspiring, motivating and training these fascinating women.” Sitharaman expressed confidence the female officers would succeed in their endeavour.
“This is not an occasion which can happen once in five years, once in ten years. This is a historic day for India. A historic day, which will be marked in navigation history and globally,” Sitharaman said, after flagging off the ‘Navika Sagar Parikrama’, at the INS Mandovi naval training base near Panaji.

“Our women are going to stand out for doing something which mostly wouldn’t even have been thought of,” the Minister said. “It is a great pleasure and it is an opportunity which no one can easily get. To be among, these great, inspired and well-motivated women sailors, who are going to take this challenge,” she said.
. I am sure we will have them back here after their voyage is successfully completed.” Later, Sitharaman told reporters, “Women are coming forward to join the forces due to their talent, skill and resolve. But whenever they require help, we are ready to provide it.”

Besides Lieutenant Commander Joshi, the other members of the Navika Sagar Parikrama team are Lt. Commander Pratibha Jamwal, Lt. P Swathi, Lt. Vijaya Devi, Lt. Payal Gupta and Lt. B Aishwarya. Speaking on the occasion, Admiral Lanba said this was the first time an Indian women crew was attempting circumnavigation of the globe.

“The circumnavigation is to be covered in about 165 days at sea. During this voyage, Tarini will call at the ports of Fremantle (Australia), Lyttelton (New Zealand), Port Stanley (Falklands) and Cape Town (South Africa),” he said.”The Indian Navy has a rich tradition of encouraging adventure as a means to nurture leadership. Successful completion of expeditions by the Navy to the North Pole, the South Pole and the Mount Everest are examples of such endeavours,” he added.

Meanwhile, Prime Minister Narendra Modi on Sunday also extended his good wishes to the all-women Indian Navy team. “Today is a special day! Six women officers of the Navy begin their journey of circumnavigating the globe on board the INSV Tarini,” he tweeted.

“The entire nation comes together in wishing the all-women team of Navika Sagar Parikrama the very best in their remarkable endeavour,” he tweeted further.’Navika Sagar Parikrama’ would be covered in five legs with stopovers at four ports (same ports as Captain Dilip Donde called on) for replenishment of ration and repairs as necessary, before returning to Goa in April next year.