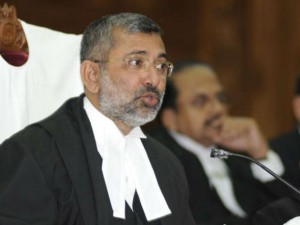 NEW DELHI: Miffed over scheduling of three-day long judges conference during the holy period for Christians, a sitting Supreme Court judge has written a letter to Prime Minister Narendra Modi and declined a dinner invitation, scheduled to be held on Saturday.
In his letter dated April 1, Justice Kurian Joseph wrote: “I regret my inability to attend the event as the Conference coincides with the Good Friday ceremonies. Good Friday is a day of great religious significance to us, marking the crucifixion and death of Jesus Christ. Thus, it is customary for us to be part of the religious and other ceremonies with the parents, elders and other family members during the holy weekend. Hence I would be in Kerala during those days.”
Further in the letter, Justice Joseph said he has taken the liberty to express a few concerns, which he felt required the Prime Minister’s consideration. “Irrespective of the religion, Diwali, Holi, Dussehra, Eid, Bakrid, Christmas, Easter etc. Are great days of festival celebrations in the neighbourhood. Your good self would kindly appreciate that no important programmes are held during sacred and auspicious days of Diwali, Dussehra, Holi, Eid, Bakrid etc., though we have holidays during that period as well”.
Underlining that the Indian model of secularism is based on the principle of sarva dharma sambhava, Justice Joseph cautioned that the country needs to safeguard its credentials.Justice Joseph then referred to historical instances and said that Jews, Zoroastrians, who came to India after being persecuted abroad, got “respect and bonhomie” from then Hindu rulers.
“Our religious and cultural festivals and hues, irrespective of caste and creed, have contributed to the vibrancy of our rich pluralistic culture and ethos. The whole world jealously looks at the beauty of the secular image, communal harmony and cultural integrity of our great Nation. India must in these trying times, safeguard her credentials and be a model that other nations must follow.”
Justice Joseph added that though it is “too late to reschedule the events. But being the guardian of Indian secularism, I request your honour to kindly have in mind these concerns while scheduling events and benevolently show equal importance and respect to the sacred days of all religions which are also declared as national holidays. I have shared these concerns with the honourable Chief Justice of India as well.”
The apex court judge has also written a letter to Chief Justice of India HL Dattu objecting to the holding of the conference of 24 high court chief justices from Good Friday to Eastern Sunday.”I may with deep anguish bring to your kind notice that such an important conference should not have been held when some of us, otherwise expected to be part of the event, or otherwise committed on account of the holy days when we have religious ceremonies and family get-together as well,” he said in his letter to CJI HL Dattu.
Maintaining that he was not striking a communal note, Justice Joseph said such serious programmes were not held during Diwali, Dussehra, Holi, Eid, etc.However, Justice Dattu hit back, saying the question the justice had to ask himself, as he cannot ask the judge, is “whether it is institutional interest or individual interest that one should preference to”.
Justice Dattu, in a letter to Justice Joseph, said assuming that religious ceremonies and family get-togethers were important, then he could asked his family to join him in Delhi.”Several other participants are coming from distant places, leaving behind families,” the CJI said.The CJI got support from a former apex court judge Justice KT Thomas asking why Christians cannot work on Good Friday.
“In America, where 98 percent are Christians, Good Friday is a working day. Christians can attend Church service and go to work. But in India we are obsessed with holiday culture. I am totally opposed to this holiday mania that we suffer from,” Justice Thomas said.Chief Ministers of various states would join the judges on third day of the conference when Prime Minister Narendra Modi would address them and the legal luminaries.
Top judges from across the country led by Chief Justice of India HL Dattu on Friday began brainstorming to find solutions to critical problems like ensuring speedy trials to tackle over three crore pending cases and lack of infrastructure in courts.