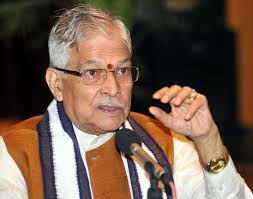 VARANASI: Senior BJP leader Murli Manohar Joshi raised eyebrows today as he appeared to defend Narendra Modi’s Congress rival in Varanasi, Ajay Rai, even as his party demanded strong action by the Election Commission.The Election Commission has ordered an FIR or First Information Report against Mr Rai, who was seen wearing his party’s symbol, the hand, while standing in the voting queue.
Though his party complained against Mr Rai, Mr Joshi described it as a minor issue. “It is not a big deal. Everyone takes their hand into the poll booth, should they cut it off?” said the BJP veteran, who contested from Kanpur this time after making way for Mr Modi in Varanasi, which he had won in 2009.Mr Rai is the third prominent candidate in Varanasi, where the main contest is seen to be between Mr Modi, the BJP’s prime ministerial candidate, and Arvind Kejriwal, the chief of the Aam Aadmi Party.
The Commission had ordered an FIR or First Information Report against Mr Modi for flashing his party’s symbol, the lotus, and making a speech near the booth in Gandhinagar where he voted on 30 April.In the middle of a bitter confrontation with the Election Commission over the refusal of permission for Mr Modi’s rally in Varanasi last week, Mr Joshi’s BJP used the Ajay Rai controversy to deliver a caustic message.
“We would like the Election Commission to ensure that when there is a violation of Model Code of Conduct, it must be properly take into the logical conclusion. So that there is no impression that different parties are being treated differently, that is our great agony,” said senior BJP leader Ravi Shankar Prasad.Mr Rai was defensive. “I didn’t flash it like others did,” he said, not naming Mr Modi, “the symbol was pinned to the kurta I wore yesterday and it stayed on. I wore it very normally.”