NEW DELHI : NCP chief Sharad Pawar has ruled out the possibility of joining NDA and said it was difficult to “accept” Narendra Modi as the Prime Minister.
Pawar said his party would prefer to sit in the opposition with Congress than join NDA. ”I can say only one thing and that is it is difficult to accept Mr Modi as the Prime Minister and imagine that he will hold the reins of the country,” he said in an interview to Rajya Sabha TV, the text of which was released by the channel. 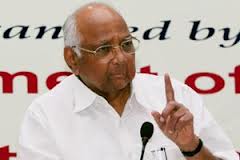 Expressing confidence that UPA would come to power for the third time, Pawar dismissed opinion polls which have been projecting NDA as the front-runner.
“In 2004, same situation was there. Everyone was talking about India Shining, Feel Good Factor. Vajpayeeji was PM. Entire media said BJP was coming back but you saw what happened?” he posed.
He was asked about statements by NCP leaders that Modi has got a clean chit from court and whether it meant NCP was open on joining NDA.“No, not at all,” Pawar replied.He said NCP is a natural ally of Congress. “Therefore, we will prefer to sit with Congress in the opposition,” he said.On whether he saw the possibility of a Third Front, Pawar said all secular forces could form a front but he was confident of UPA coming back to power.
To a question whether he is in the race to become the prime minister, Pawar said that with limited number of seats (which NCP is contesting), he said he does not know how that can happen.He said his priority was to improve his party’s tally.
On the future leadership of NCP, he said it had several strong leaders capable of becoming the party chief.