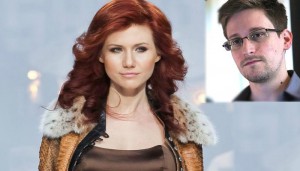 LONDON: A defector has revealed that 32-year-old Russian spy Anna Chapman was ordered by her Russian spy bosses to seduce US whistleblower Edward Snowden
The Mirror quoted a former KGB major Boris Karpichkov as saying that the whistleblower would have a right to Russian citizenship had he fallen for her.
This, however, would have locked Snowden in Russia, as he would have needed permission because of the citizenship, the report added.
Karpichkov said that though Chapman and Snowden met just once, the whistleblower was concerned about what the consequences would be.Chapman even proposed marriage to Snowden on the orders of Russian-intelligence high command on Twitter.The daughter of an intelligence officer, Chapman was first based in London from where she moved to New York in 2009.
Chapman, along with 9 others were betrayed by a Russian agent who fled to the US and she was was accused of spying on the US in the guise of an internet property business that she was running there.
In a swap that is widely know as the biggest exchange of spies since the end of the Cold War, the ten of them were deported.After the spying case of 2010, Chapman was stripped of the British citizenship she had acquired after marrying a Briton, whom she divorced in 2006.