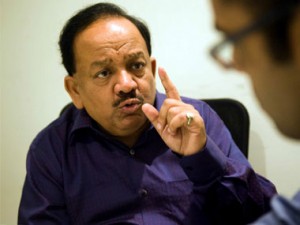 NEW DELHI :Union Health Minister Harsh Vardhan has been forced to clarify for the second time this week after outrage over a view shared on his website that sex education should be banned. He has been battling criticism after suggesting earlier that promoting condoms sends a wrong message and fidelity in marriage is a better way of fighting AIDS.
“Sex education is necessary, but without vulgarisation,” Dr Harsh Vardhan amended today, denying that he had proposed a ban.The minister, who is in the US, was pilloried at home after the media highlighted a point in his “educational vision for Delhi”, which said, “So-called ‘sex education’ to be banned. Yoga to be made compulsory.”
In his clarification, Harsh Vardhan, an ENT specialist, said he had expressed that view in response to the UPA government’s decision in 2007 to introduce the “Adolescence Education Programme,” in schools which, he said, was opposed by several chief ministers.
“Crudity and graphic representation of culturally objectionable symbols as manifested in the UPA’s so-called sex education programme cannot be called sex education,” he said.The Congress questioned it. “I don’t know what Dr.Harshvardhan means by vulgar sex education,which school teaches that?” asked the party’s Randeep Surjewala.
Harsh Vardhan, who was the BJP’s candidate for Chief Minister in the December Delhi polls before he contested the national election, insisted that these were his personal views but his critics did not make that distinction.
“Highly disturbed and disappointed by statements by a doctor health minister banning sex ed in schools. BJP at its regressive worst,” tweeted author Chetan Bhagat.
The minister is yet to untangle himself from the controversy after his comment in an interview that the focus on condoms in AIDS awareness campaigns sent a “wrong message that you can have any kind of illicit sexual relationship, but as long as you’re using a condom, it’s fine.”
Defending the comment, Dr Harsh Vardhan said on Wednesday, “Condoms promise safe sex, but the safest sex is through faithfulness to one’s partner.”