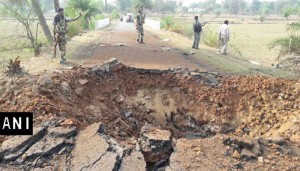 RAIPUR: In Chhattisgarh, seven personnel of the Central Reserve Police Force (CRPF) were killed in a powerful blast triggered by the Maoists in Dantewada district in tribal Bastar region.

Dantewada district superintendent of police said the Maoists triggered a powerful IED blast around 1530 hours targeting a mini van in which they were travelling and later opened indiscriminate firing on the injured personnel.
While five CRPF men were killed in the blast, two others were killed in the subsequent firing .About 30 personnel of the CRPF 230 battalion were on their way from Nakulnar to Dantewada in three vehicles when the incident happened near Melavada village. One vehicle became the target of attack while two other vehicles returned.
The explosion was so powerful that the vehicle was thrown up in the air and its parts were flung in different directions. Additional reinforcement have been rushed the spot of the blast and a massive combing operations have been launched to flush out the rebels.