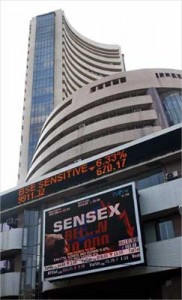 MUMBAI :  : The Indian markets have left their global peers behind in a sharp take-off over the last four trading sessions.This comes even as the results of the General Elections are a couple of months away, in which market players expect a government with a clear majority and with complete focus on economic growth. However, experts say that only a doubt of a pro-growth government not coming in can derail this momentum.
The benchmark Sensex at the Bombay Stock Exchange has, over the last four trading sessions, risen by 4.7 per cent following strong foreign institutional investor (FII) inflows amounting to over Rs 5,000 crore. Rising by 405.92 points or 1.89 per cent, the Sensex hit a new high of 21,919.8 on Friday — now at a striking distance from the psychological mark of 22,000.However, while FII’s have been at the centre of this rally, domestic retail investors have stayed away from the markets.
With a gain of 4.2 per cent, only Nikkei 225 of Japan, in the last four sessions, has come closest to the Indian markets, which was the biggest gainer among major markets. While Hang Seng in Hong Kong rose by 0.7 per cent, Shanghai Composite fell by 0.8 per cent in the same period. The European and the American markets, too, have lagged significantly.
“It is a pre-election boom and there is bullishness around a pro-growth government coming in,” said S Naren, CIO, ICICI Prudential AMC. “The levels are likely to sustain, unless doubts start emerging on the prospects of formation of such a government.”There are others who voiced similar opinion. “The major theme that is playing out right now is the ‘Modi theme’ — he moves the market, and it is looked at with optimism,” said Raamdeo Agrawal, joint MD, Motilal Oswal Financial Services.While some may feelthat the rally is a little pre-mature, experts feel that sectors that were trading cheap are bound to grow expensive on valuations when high growth rate comes back in the economy and that is what is happening now.