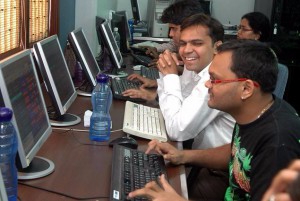 MUMBAI: The benchmark BSE Sensex regained the 25,000-mark by recovering over 206 points in early trade on Friday mostly driven by a value-buying in blue-chip stocks and recovery in the rupee amid firm Asian cues.
The broader NSE Nifty too reclaimed the 7,600-mark. Besides, covering-up of short positions by speculators also supported the recovery. The 30-share index surged by 206.65 points or 0.83 per cent to 25,058.48 points with all the sectoral indices led by oil&gas, power, healthcare and realty, trading back in positive zone, rising by up to 1.35 percent.
The gauge has lost 1,309.076 points in the previous four straight sessions on persistent foreign fund outflows and China’s central bank lowering its currency yuan against the US dollar amid concerns over a slowing growth. Also, the NSE Nifty was again trading above the 7,600 mark by recovering 65.80 points or 0.86 percent at 7,634.10.
Brokers said value-based buying in blue-chips, spread over a broad front, after recent losses coupled with covering of short positions by speculators helped markets’ mood to improve. Besides, rebound in Shanghai shares and a better trend at other Asian markets triggered a fresh round of buying activity, they said.
Among other Asian markets, Hong Kong’s Hang Seng was up by 1.08 percent while Japan’s Nikkei up 0.39 percent in early trade today. Shanghai Composite index opened 2.23 percent higher after authorities suspended a “circuit breaker” mechanism that this week fuelled a global market rout by twice automatically closing Chinese markets early, fuelling a global market rout. The US Dow Jones Industrial Average, however, ended 2.32 percent lower in yesterday’s trade.